Carbine and Rifle Show Off Thread!

Why didn't anyone tell me the KAC URX 3.1 rail covers fit like they were meant to be?! 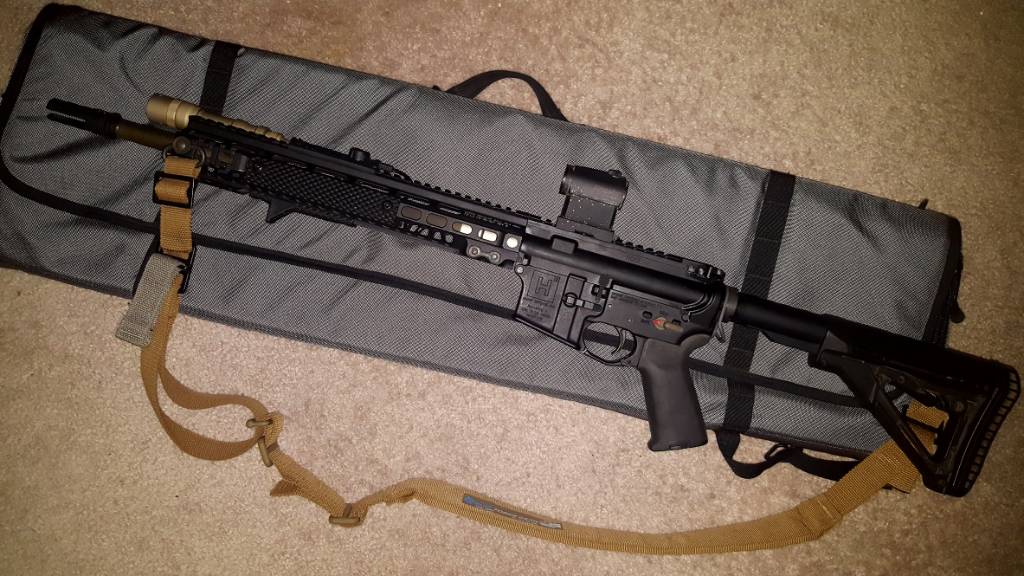 Only mod is a badger bolt release and knights flash hider just for somthin different. 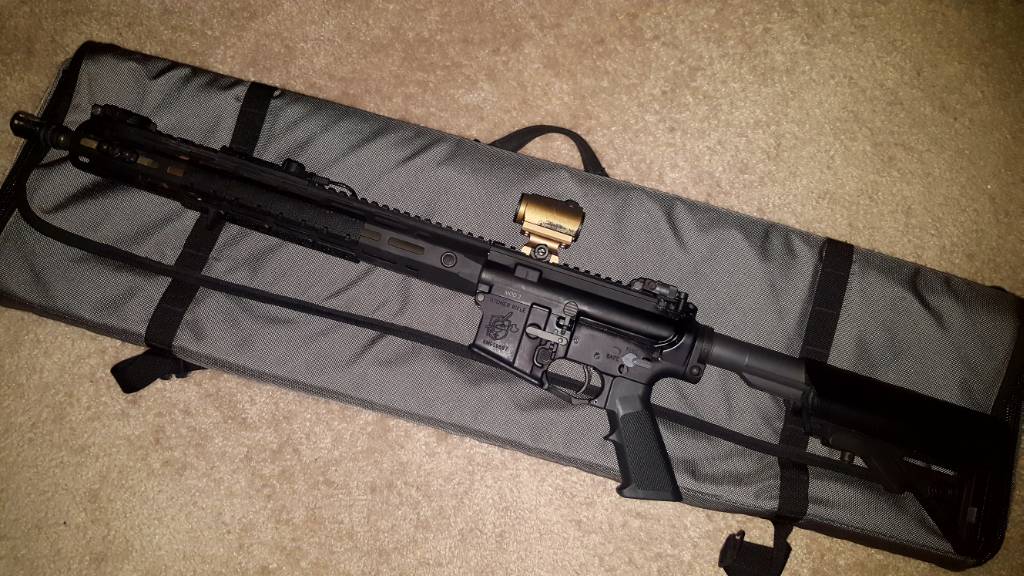 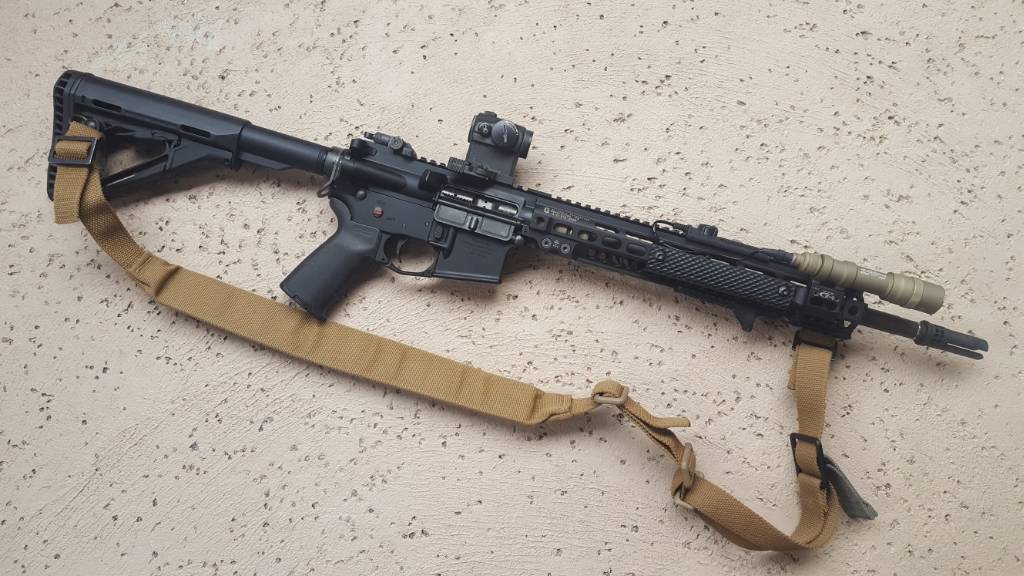 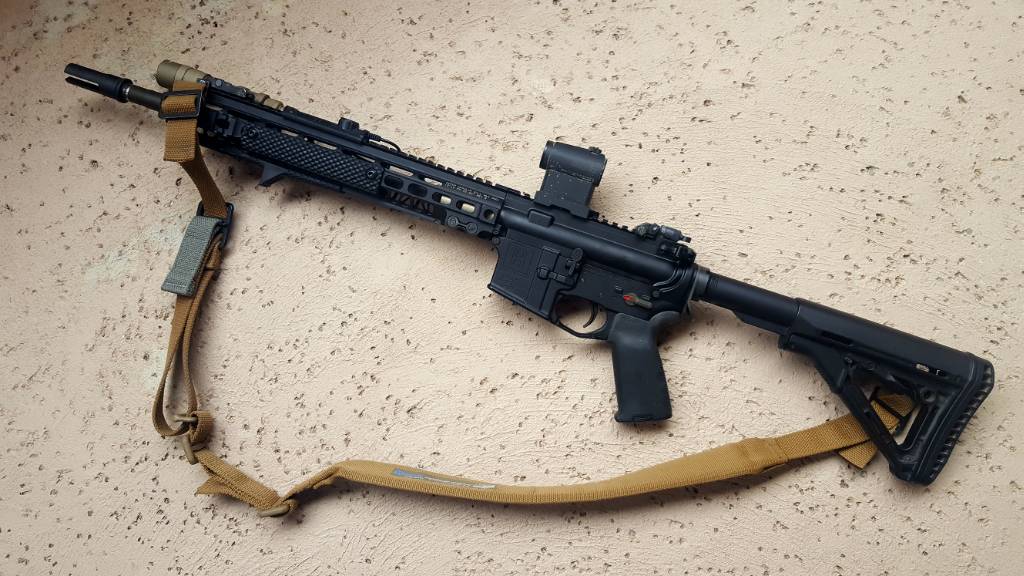 May I ask what offset Aimpoint mount you're using and how is the visual clearance with the MAWL and light? Does it obstruct a large part of the view through and around the optic?

GraeLine said:
May I ask what offset Aimpoint mount you're using and how is the visual clearance with the MAWL and light? Does it obstruct a large part of the view through and around the optic?
Click to expand...

A lot more clearance than I expected. There is some obstruction but for the ranges I expect to use the optic for, (24-50 yards) it's manageable.
M

Because I didn’t know any better at the time. Windham weaponry mid length. Only a couple thousand rounds down the tube. No problems yet. Troy grip and rear sight, roschworks front plus surefire, law folder, Gucci charging handle, vtac sling. Purely a house gun. And fun of course. Being non mil/le this is ok for now. Had I known I would’ve saved up and gone for a bcm or similar instead.

Am I confused or does your WML have a WML?

Staff member
Moderator
Pentagonlight with an offset laser. Been a while since I've seen something like that.

Pat Tarrant said:
Pentagonlight with an offset laser. Been a while since I've seen something like that.
Click to expand...

Staff member
Moderator
Vendor
Let me tell you a story. The concept of "telling a story" was first introduced to me in cave rescue training. The instructors would say "tell me a story about your system" and you would explain every component and the background to it of a system. More recently this was brought up in the context of a rifle when I trained with Defoor.

I'll start at the muzzle.

SureFire closed tine warcomp: Closed tine to be less likely to snag straps, wires, tubing, etc. Less wear and tear on bags. Maybe a little more durable than open tine but that is pretty secondary. On a longer gun I am less concerned about flash mitigation because there is less flash, not as big of a deal compared to a 10.5" gun. Warcomp because it's a decent balance between muzzle rise mitigation, good flash suppression, and minimal increase in report/blast like with some comps/brakes. Compatible with SF suppressors.

Pinned and welded as short as legally possible: I send my uppers I have pinned with instructions to cut the barrel as short as possible to clear the rail and be legal. In a world of 11.5 and 12.5" guns a 13.9-14.2" barrel depending on muzzle device has more than enough barrel to get the job done and gives me plenty of rail to mount lights, lasers, switches, and grips is pretty handy, not too snappy, and no paperwork.

Mid-length gas: Less snappy than carbine gas length and perfectly reliable in the barrel lengths I am running.

Wedge-Lock rail: This is the factory rail and is a variant of the wedge-lock popularized by Hodge but branded as FN. It is a small diameter M-Lok rail that is rigid enough to support multifunction lasers for use during the day and under NODs. Length is a touch over 13".

Light: SureFire Scout 600 DF. The brightest current SF light available mounted in an Arisaka M-Lok mount so the light is tucked into the rail as much as possible while letting it clear the MAWL. All hardware is threadlocked. The bezel of the light is even with the front edge of the rail. This leads to a little shadow off from the muzzle device but reduces the snag factor by not presenting a huge fork on the front of the gun made up by flashlight and barrel/muzzle device. The light is activated with the SR-07 switched mounted on the 12 o'clock rail behind the laser. This makes the configuration ambi as well as providing me with momentary and constant on options. I'm considering adding a dual function tale cap because tape switches can fail but I have been pretty lucky lately and haven't had many issues with them so I'm not in a huge rush.

Laser: BE Meyers MAWL. Mounted for right hand user on 12 o'clock rail with the bezel as close to the level of the front rail as I could get. I'm considering moving it back one more slot. Similar to the light this reduces the fork phenomenon but I also do this with lasers so that if the gun bangs on a barricade/wale/door frame/etc the fail will take some of the brunt of the force instead of loading all the force onto the laser (expensive, fragile, zeroed, etc).

Forend Grip: Magpul M-Lok AFG. I was using a minimalist grip stop and it wasn't enough. It also couldn't be mounted far enough forward because the M-Lok hardware would press against the gas block due to the narrow diameter of the rail system. Going with the magpul put the hardware to the front and rear of the gas block although I still had to file the one of the T nuts to get it installed and file both screws so that when the barrel flexed it wouldn't come into contact with the tip of the screws. I have been through the full spectrum of foregrips from full size vert grips to stubby grips to no grip to small handstops, etc. The AFG is OK but not perfect, it is however better than nothing and better than the small grip stop I was running. Threadlocked in place.

Forward sling point: Magpul M-Lok sling cup. pretty straightforward. Positioned forward enough to be stable when the gun is slung front or back but also not so far forward that it bugs me. Threadlocked in place.

Optic: Vortex HD Gen 2 1-6x MRAD in Geissele 1.93 mount. I'm a huge fan of red dots but a 1-6 gives me more capability. I have shot the HD Gen 2 on various guns out to 550yds and the ability to pick up splash at distance and make holds on the fly combined with improved PID at closer ranges sold me on it. The downsides are weight and lack of NVG capability. The 1.93" mount is beefy and positions the optic well for good "stand up" use with and without other variables (gas masks and lasers although the MAWL sits low enough that it doesn't matter). 1.93 can give a little neck strain in the prone for extender periods but only on the flat range and disappears when you use a little terrain.

Charging handle: Radian. its ambi, low profile, and works. I'm not emotional about it beyond that.

Trigger: Geissele SD-C. Flat bow, ~4.5 pound two stage. Fast when I need it to be fast, allows me to stack it for precision, reliable because it is a Geissele.

Grip: Magpul MOE grip. Most of my guns have MIADs on them but the configuration I run is pretty close to the MOE. I need to snag a lube bottle insert.

Rear sling points: Magpul Rear QD plate and QD points in the stock. I alternate between stock and receiver but lean more toward the receiver due to habit. The slings very stable on my back but also lets me do manipulations easily.

Sling: BFG VCAS with sewn in QD points. Just works and is low profile compared to ones where the QD is user installed on the sling.

Stock: Magpul MOE SL. I've pretty much standardized on these for all my guns that actually get used. The cheek weld area has a good profile that is wide enough to be comfortable and have good index. The rubber pad holds it in place on clothing and gear. Sling points. Locks up solid. Priced right.

Gripes:
-Weight: This gun weighs 10lbs 0.4oz empty. It's heavy and a little front heavy at that. I will eventually swap the 1-6 out for the lighter E version. Four ounces is nice but I would rather shave a pound or two off, just not realistic to have a gun this capable.

-Sights: The 1-6 doesn't allow me a passive aiming option for NODs. I will likely end up adding an offset aimpoint micro or acro but that takes me back to the weight issue.

-Grip: Grippiness up front. I am probably going to end up adding more rail scales and I am considering having some areas coated with silicone carbide to get better purchase. I may try some other options over the AFG chasing this same goal.

Anyway, that is what I am running right now as my main GP gun.

My main rifle/patrol rifle. Its a BCM complete rifle. Pinned 14.5” barrel and KMR-A rail. (I know I know but I’m too lazy to change from dickmod)
I have a Geissele SSA-E trigger in it now. The rest of it would be a Scout DF on an Arisaka mount. I used the Cloud Defensive LCS setup at the 12 behind my backup MBUS (required for work). Then it has the Razor-E on a Midwest Industries QD mount. I use a BFG sling on it right now but my Centrifuge Training sling will be here this week and will be going on this rifle to try out.

This rifle is setup pretty well perfect for me now. I don’t have NV yet so no need for a different rail or a laser. If I was to change anything it would be upgrade to the optic package to a Kahles and a Geissele mount only for the sole reason of cutting more weight but I’m in no rush to do that as this setup works great as it is.

Messing around with some stuff then needed a new zero.
Mounted t1 on a 1.93 gmount
Switched up the position of the m600df
Magpul k2+ grip while freshening up springs
Removed the grip panels
Switched to closed tine warcomp for science 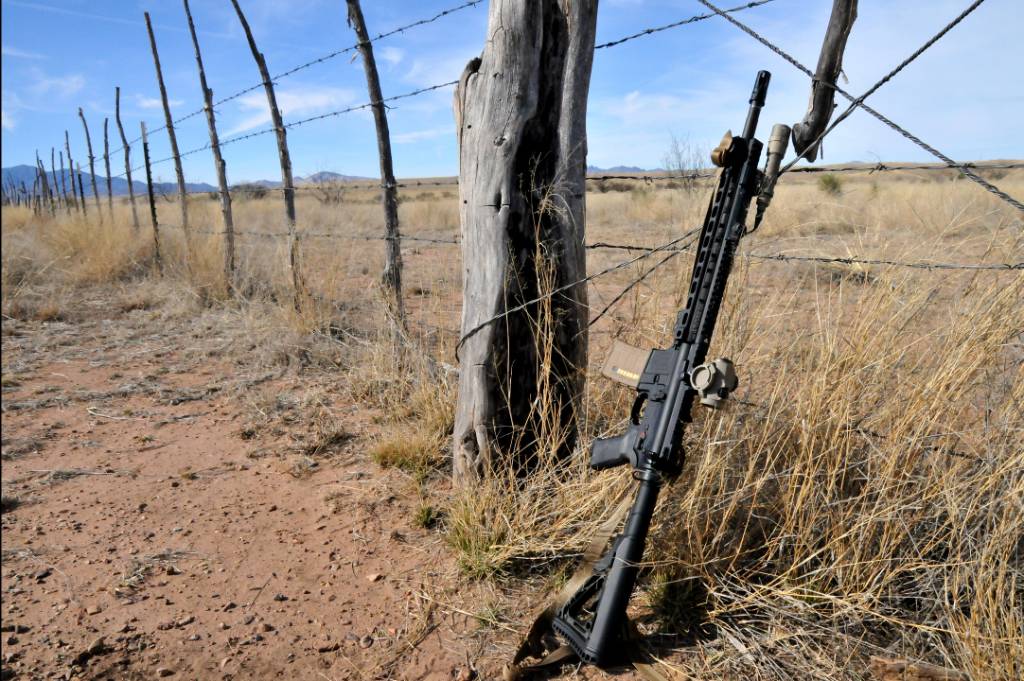