The price on the YHM Turbo makes it hard to resist. Short, light and said to be durable. I want something for my 11.5 BCM and a 12.5 I am putting together. I am new to suppressors , this would be my first. Any reason this would be a "poor" decision?
S

The Turbo is my first and only 5.56 can so know that I don’t have nearly the experience as some others on here. I tagged your post waiting for some replies and since no one has yet ill throw out my 2 cents. The weight/size/price is what attracted me to it. It has higher back-pressure than other 5.56 cans. If you’re already over-gassed it could exacerbate the issue more so than a different 5.56 can but you’ll have to talk to other guys about that.

I really like the mounting options. Again, I don’t have experience with others but the mounts are less expensive than other options and I have had 0 issues with it. Quick and secure. I have taken the can on and off a boatload of times, never had carbon lock.

I am running it on a Faxon 11.5 Big gunner which has a huge gas port. I needed an adjustable gas block to tame that setup. If your barrel is gassed properly you shouldn’t have too much issue.

I really like it, I am considering another, or even the Turbo K which was announced at SHOT.

YHM has great customer support. Could you do better? Yeah but you will likely pay more.

Ditto @Shwa, the Turbo is my first silencer purchase as well.

It is lighter than I thought it would be. I don't really consider the mount's weight, since it weighs about the same as the brake it replaced.

It rings my shooting side ear when fired w/o ear pro. I expected the can to be a little on the loud side. My rifle is a 16" carbine-system (and probably overgassed) 5.56 so I'm not really surprised. I am replacing that barrel soon, so I'm not really worried about it.

For sound reference, that exact rifle is the bane of my friend's range experiences, and it has made me wince when not doubled up on ear pro while indoors. The amount of sound moderation, while maybe not entirely hearing safe (yet) is well worth the price so far.

Since this is my first foray into stamp collecting, my experience isn't worth a whole lot, but those are my thoughts. I'm interested to see what other people think about it and maybe some stuff I need to be mindful of going forward.
S

The Turbo seems to perform well. It may not perform as well has much higher priced models and won't be as light as titanium models. The locking mechanism works well and it is hearing safe on the 16" AR I tested it on. It seems to perform better on the rifle I tested it on than others but not as well as the higher priced Thunderbeast. My assessment (without the $$$ monitoring equipment) is that the Turbo is a very good can for the money and I am not aware of a better option for the same money. I was only able to test against other cans I had in stock so can't give you all the comparisons unfortunately.

As stated, with any suppressor on an over-gassed rifle, this will increase the levels of gas. For the full benefit of any suppressor, a bolt gun will out perform a semi-auto gun and you will avoid the gas back in your face (for obvious reasons).

Thanks for the input!
The mount does look pretty simple and solid. The idea that if the spring in the mount goes bad just replace the muzzle attachment. I like the look of their new flash hider.
I may have to give the turbo a try. The turbo is for my BCM 11.5 and a 12.5 Ballistic Advantage build. I believe they have appropriate sized gas holes. If I put a carbine buffer in the 11.5 or 12.5 they run a little hot throwing brass at about 2. Slows down nice and throws brass at about 3 with an h and 4/430 with h2.
There's a couple reasons I am setting up a couple guns to run a suppressor. I don't see my old ass grabbing ear pro in the middle of the night if I need a gun, a suppressor would be nice. This set up will mainly be used for night shooting on private property. I don't want to freak out neighbors within ear shot of a rifle. They're used to hearing it just want to stay on their good side. I guess that's a reason (excuse) , that's what I'm telling the wife.

Sasquatch Hunter said:
Thanks for the input!
The mount does look pretty simple and solid. The idea that if the spring in the mount goes bad just replace the muzzle attachment. I like the look of their new flash hider...
Click to expand...

Now we're up to something I can slightly talk about, I'm in!

I have a Nitro 30. To be used on a couple guns, but so far have only shot it on the 5.56 upper. And very little as yet, as it's been in my hands a few weeks. 419 days waiting for paper. So during pretty much that whole time, I have had the YHM brake on a couple of guns. This one https://yhm.net/30-cal-lt-a-muzzle-brakes.html (or variants for my proper threading).

It is very effective, even good enough at flash. It is great to me, but apparently very annoying to neighbors, so I got their blast can, and intend to use that almost whenever not using the suppressor. It seemed to make no difference in recoil, even though logically it should.

I agree that the big gripe of YHM mounts sucking is that it Relies On A Spring! Well... sorta. Tighten consistently and it should be pretty close to a steel-to-steel connection with the spring just keeping it from falling off. And also what you said: I'll take a relatively inexpensive wear part any day. I bet you could even manage to replace the spring, or by the time ours fail someone will do it for us for a nominal fee.


FWIW, the Nitro seems to suppress the 5.56 perfectly. I can't hear anything from the muzzle, over the a-bit-louder-than-.22LR sounding crack. Still need earpro, but it's in a weird place where it doesn't seem like you do when wearing it. So I guess, the perfect ear safe config, as earpro mutes the remaining bullet crack sound 99.95%.

Gotta get the .300 set up to try out subs and see how that goes though. Then I'll know what I think of sound suppression.

I just bought a turbo K. I'll let you know in about 6 months lol

Sent from my SM-N950U using Tapatalk

Still about my Nitro, but I got a properly drilled gas plug for my SIG 556/551 recently. Dialed properly, it runs like a charm, and emits essentially no gas even with the suppressor mounted. Neat.

So, starting to make me a believer in adjustable gas blocks etc.
D

So I've had my turbo 556 for a while now and I really like it. I put the bower griptastic cover on it and never looked back, it was a bear to put on but worth it. 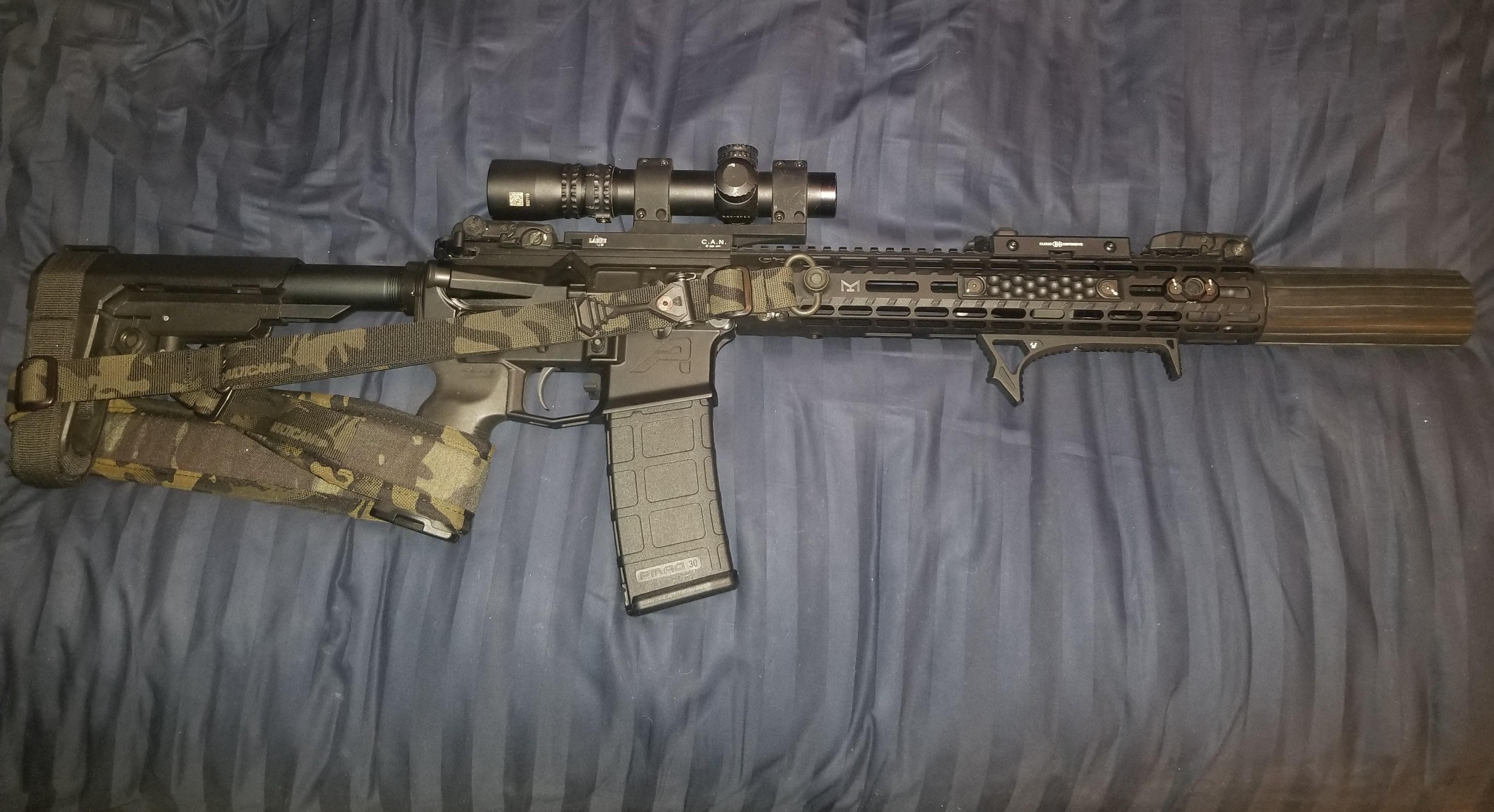 We've got about 5 guys running them. Great sounding can, very quiet at the muzzle, and seemingly no issues. I wish I had bought one when they were going for $499.
M

My agency has recently purchased a large quantity of the YHM Turbo K cans for all of our patrol rifles. While the cans come with the QD mount we are direct threading them onto the barrels (Sionics, 10.5", extreme reduced gas port). So far we have been nothing but pleased with them.