Started off with an overview of the class and our goals of the day. We did a medical briefing, identified senior trained medical students in the class and assigned callers and runners incase of a training incident. Went over the safety rules and when we will be engage our carbine safeties. Ian runs a hot range.

We started off with a cold open. There was two vehicles on either side of the range with steel targets setup in front of the cars. A steel target was in the center of the range along with a paper IZZY target right next to it. We were in the driver’s seat belted in, our rifles were in the trunk in a bag unloaded. On the beep of the timer. We were to bail out of the car, go to the trunk, open the bag, load our carbine while behind cover engage the steel target with a predetermined number of shots. Go to the other side of the vehicle and do the same. Run to the opposite vehicle engage that target while behind cover, move to the center of the range and engage the center steel target, transition to your secondary and two head shots into the paper IZZY targets. This was done 15-18ish yard from the targets. I rushed the pistol head shots and was 1/8” high. DQ’d!

We moved up to the 7 yard line and worked carbine mechanics, ready positions, reloading techniques and our offset being so close to our target. We worked unconventional shooting positions of all sorts. Ian showed us and we tried them all in the mechanics portion of the class. We were not told which one to use in the drills, it was our choice. We were shooting at the brain box of a IPCA cardboard target.

We worked out of the vehicles for the remainder of the day adding new skills with each drill. The follow on drill would incorporate each of the skills we learned throughout the day. It was a constant building process all day. The biggest issue I had was mounting the gun on my support side, I have an awful time seeing my dot. It would take me WAY TOO LONG to get the correct position so I was able to get accurate shots on target.

We were shown how to deal with a non-shooting passenger, how to keep them safe, calm and out of our way while we shot the bad guys from behind or under the vehicle for cover. Each drill became a little more complicated with new ways of making us think before we began shooting the targets. Ian added non shoot targets over the bad guy on some of the targets and if we “shot the no shoot” target, we were to circle the bad shot and write a loved ones name around that hole. Thankfully I did not have to write a loved ones name on the “no shoot” target.

Malfunctions were induced with the evil malfunction stick being inserted into our ejection port as we were going through the drills, forcing us to get completely behind cover and fix or transition to our secondary weapon, before getting our long gun back up. That was FUN! I hated that damn malfunction stick. EVIL f***ER!

We did some drills starting off alone and bounding to the other vehicle where another shooter was engaging targets all while the evil malfunction stick was f***ing with us, complex target names were called out, so we had to think of which target was being called out, the placement in the target of where the shots were going and the number of shots. For example, Bravo, Charlie, Delta would be called out. The first was the target name (B was painted on the target), Charlie indicated a chest shot, Hotel would have been a head shot, and Delta was the number of shots, (D is the fourth letter of the alphabet) There was about 10 targets placed all over the range in different places and different elevation with letter/numbers/shapes. The drills in the late afternoon had a lot of pieces, movements, thinking, fixing malfunctions, reloading and transitioning to secondary in them. REALL FUN STUFF!

The last drill of the day incorporated all the skills we learned throughout the day. We had a non-shooting complaining/scared passenger in the car with us. We needed to get them out fast, safely to a behind the wheel well for safety, calm them down, by speaking to them calmly telling them what was going on. Ian is calling out specific targets with shot placement and number of rounds, you are searching the range for the intended target, decoding Ian’s instructions all while he is f***ing with your gun trying to produce malfunctions. Once there is a pause in the fight, you are to get your passenger up and move the other car for cover and continue to engage the targets Ian is calling out. As you are moving if a target is called out you are to engage it on the move. I got caught-up in the first part of the drill and had to be reminded to get my myself and my passenger over to the next car.

This was my first vehicle class and I liked working in and around cars. We all spend a lot of times in our cars and I think its important to be comfortable “debussing” getting the guns out and using the vehicle as cover. I really like Ian’s teaching style. He describes the drill, demos the drill, and then describes the drill again. He is very personable, approachable and likable. He has the personality to coach his students in a way that makes them want to succeed. He treats his students with respect and is polite. Not all instructors are like that. I will be taking more of Ian’s classes in the future, he is one of the better instructors that I have trained with.
##

Faith, Ian’s dog sporting her adorable ear-pro. She was our RSO and emotional support through the class. She is adorable! 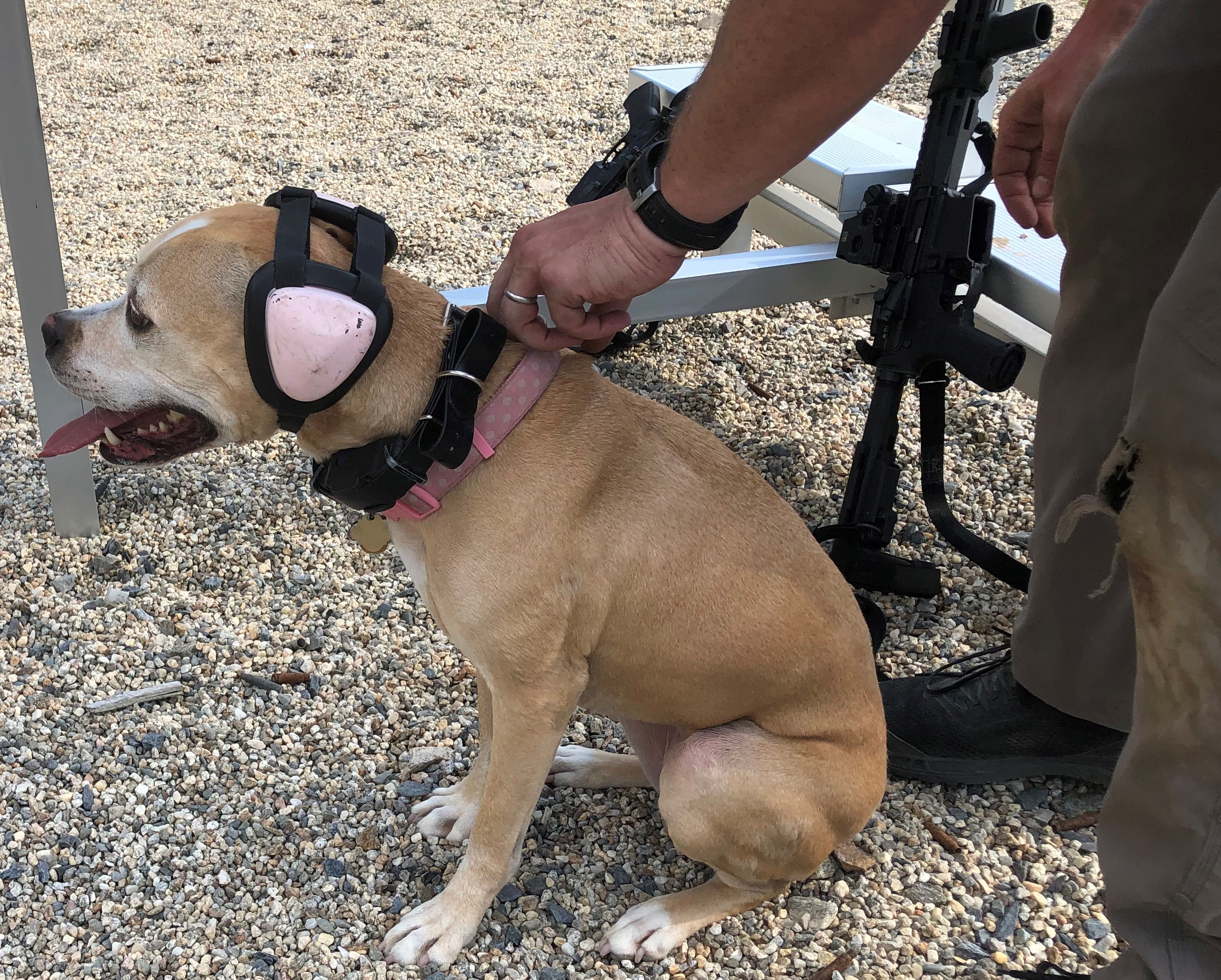