A Norwegian perspective on the HK416

Staff member
Moderator
I thought some information about the experiences we have had with the platform might be interesting, so what follows are my experiences and observations having used the system for 5 years.

I also hope to clear up some erroneous information posted online by a few norwegian soldiers, regarding the issues we have seen with the weapon.

The Norwegian Military has fielded 42,000 HK416 rifles, in 16.5" and 10.5" configurations. We have had units deployed with the rifle to Afghanistan since winter 2008, and it has performed very well, with only anecdotal FTF issues, mostly due to ammo. It has handled the operational terrain and weather factors very well, and has proven itself as a very reliable weapon for the Norwegian military.

So far, the only issues we have had are the following:

-Adjustable gas regulator popping out due to carbon build up underneath the selector and locking pin/spring assembly, causing short recoil/"bolt action" operation. This is a non-issue now, and started because NDLO did not want maintenance of the AGR to be done on the user level (1st line maintanance). HK recommended cleaning it after 1200-1400 rounds.

-Disconnectors breaking, inducing involuntary automatic fire. This has happened to about 60 rifles, the 10.5" versions. No injuries, but one incident was during a pretty heavy TIC in Afghanistan. At first they thought this happened due to poor materials used by HK, but further research by the Defence Logistics Organization discovered that the "environmental" ammo we are/were using caused the bolt to travel to the rear faster, causing the hammer to strike the sear with more force again causing more stress.

-Wrong diameter roll pins. The weapon is constructed with European standards for the pin holes, and US standards for the pins. The result is pins smaller than the holes, sometimes wiggling out. Most prevalent on the charging handle latch and buffer, the latter causing cycling issues. There was also one incident where the roll pin holding the ejector in place wiggled out during firing. The result was a discharge with the bot out of battery, and an exploded weapon. Fortunatly no injuries to the shooter.

This is a reclamation issue, and we started last October fixing these issues. We are receiving a new gas regulator, a drop in two-stage trigger group with a shield for the sear and correct dimension roll pins. This work is proceeding smoothly.

In addition we have found signs that the "environmental" ammunition is wearing and tearing more rapidly than the ammunition used during testing (M193, M855 and SS109). Due to this fact, and the health issues regarding the eco ammo, we are currently using SS109 ammo for our guns. Works very well.

As to my experience, I was issued my rifle in may of 2008, and have used the same rifle until ETS'ing in May 2013, including a trip to Afghanistan as part of an OMLT in 2009. I had close to 13000K rounds through my rifle, and only swapped out the piston and one handguard (an armorer said I broke the threads on the retention screw by tightening it too hard.....whatever....).

I cleaned my rifle regularly, and made sure to keep all parts except barreland chamber properly lubed at all times.

I had one failure to fire, ammunition related, and one embarrassing incident where I experienced short recoil for every shot. This happened after shooting several mags pretty rapidly in a completely dry weapon during a live fire exercise. My mistake. No problems after that.

Now to comment on issues that have been aired: As far as fully automatic fire goes, again, we went from a full sized battle rifle in 7.62 to the HK416, so I feel that it is more controllable in fully automatic fire. We do not shoot it that way often, however. Maybe one or two times during the soldiers one year service, for motivational purposes.

-Hot handguards during shooting:
I must admit that I have never experienced this, not in Afghanistan during summer or here in Norway.

-Accuracy:
Our experience is that our current group of soldiers become better marksmen quicker than previous groups who used the G3. On KD ranges with pop-up targets, there are no issues knocking down targets at 400 meters consistently. We have had hits at further distances than that in Afghanistan with Comp M4's and 3X magnifiers. In my experience the inherent accuracy in the rifle is better than what most shooters can accomplish.

The main issues regarding accuracy, although not weapons related, is due to faulty Comp M4's. The red dot has a tendency to get fixed in place, and not move when we make adjustments.

-As far as parts life goes, I have spoken to the head HK416 armorer in the Defence Logistics Organization, and he has yet to change an ejector or extractor, the pistons he has changed are changed because soldiers break them trying to scrape off carbon build up with sharp objects, thus removing the protective layer. No piston rods have been broken yet.

There were some issues with bolt lugs shearing after approximatly 5k rounds on some of the earlier guns. That was due to HK changing their supplier of steel, and that supplier had issues with the alloys used and the hardening process. HK switched supplier, and the problem went away. Bolts now last for 8-10k rounds, depending on firing schedule.

-Front BUIS getting stuck after shooting due to carbon build up, is easily remedied with some cleaning and lube, so it's a non issue. I have shot strings of hundreds of rounds several times, and it will still flip up and down.

-The gas block is not supposed to be removed during 1st line maintenance, so the point is moot.

-I have seen one loose buffer tube, and one twisted buffer tube since I was issued a rifle, so not a very common issue.

-The piston is supposed to turn black, a natural effect considering the temperatures of the gas it is in contact with. Never seen or heard of a "nipple" breaking. Most likely user induced if it has happened.

-The only issued accessory that wobbles on the rail is the M3X light. That is due to the crappy mount on the light, and not the rail itself. The light does not wobble on my Glock 17.

-As far as firing pin retaining pins coming out, that is user induced. We have the captivated pin. I have personally seen one pin come out. Never seen or heard of a firing pin breaking, probably a soldier using it for something he isn't supposed to and breaking it. Ejectors falling out sounds very strange as well.

-The dust cover issue is only relevant during winter, and is due to not lubing the dust cover spring and rod, not a design error. If it is not properly lubed, snow catches, melts, turns to ice and when they close or open it, the spring revolves around its own axis, causing it to lose tension.

-As far as spare parts and repairs go, the handful of weapons we turn in to the armorers are fixed within a week.

There are of course the occasional failure to fire, failure to feed and other issues, but all in all it is a very good weapon system, and has proved itself as a worthy and reliable replacement for our G3's. 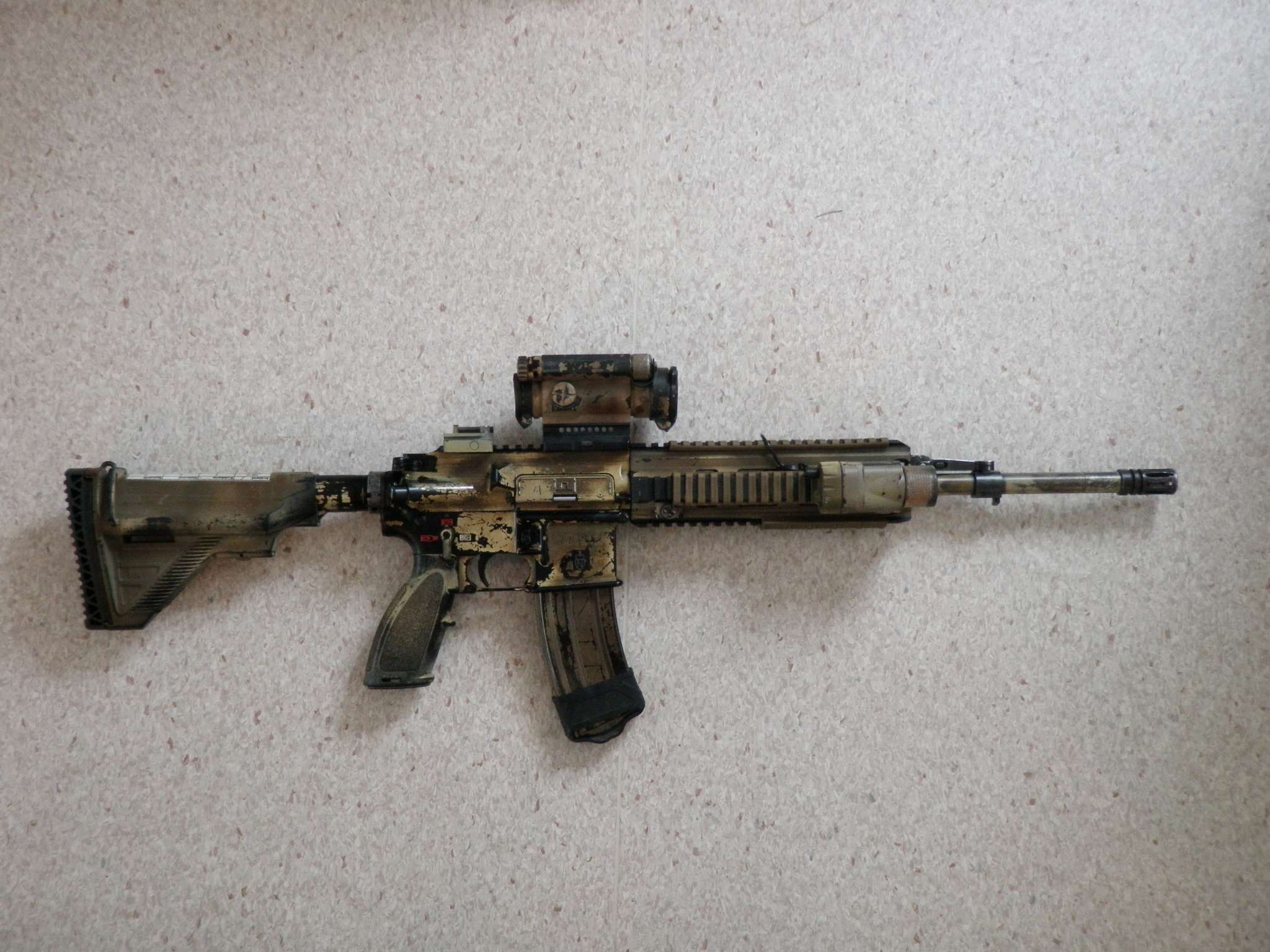 As I have mentioned in the above post, the HK416N has been upgraded to ensure higher reliability.

The issues that have arisen are:

-Adjustable Gas Regulator popping out, or wiggling to Suppressed setting during firing. It is a maintenance issue, but disassembly of the AGR is as of now not part of 1st line maintenance.

-Disconnector breaking. At first thought to be due to poor materials used by HK during manufacturing, turned out to be a result of the environmental ammo being "hotter", causing more strain on the disconnector when the hammer struck it during cycling of the bolt. Mostly an issue on the 10.5" HK416K.

-Wrong dimensions on roll pins. Mostly an issue on the charging handle and buffer, although there has been one incident where the ejector assembly roll pin was pushed out during firing. It finally protruded so far out of the hole to cause an out of battery incident, with the gun blowing up.

The modifications done to my gun are:

-New AGR, with new pin and spring assembly. It will not come loose anymore due to carbon build up, and is much easier to clean. No disassembly needed. It also has bigger ports, allowing for increased gas flow.

-New trigger assembly group. Two stage trigger, same as on the HK416S, and a hood protecting the disconnector from wear. 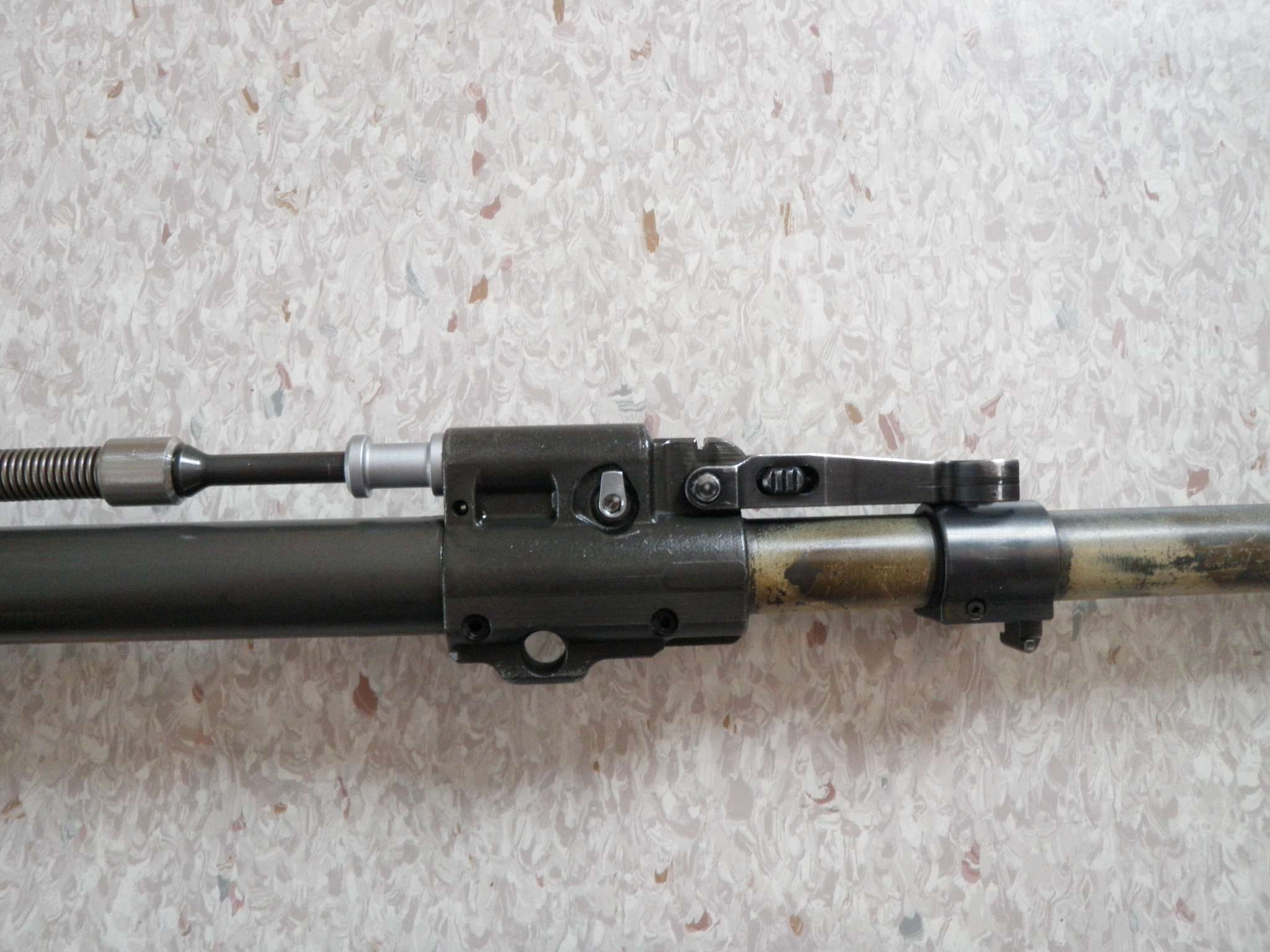 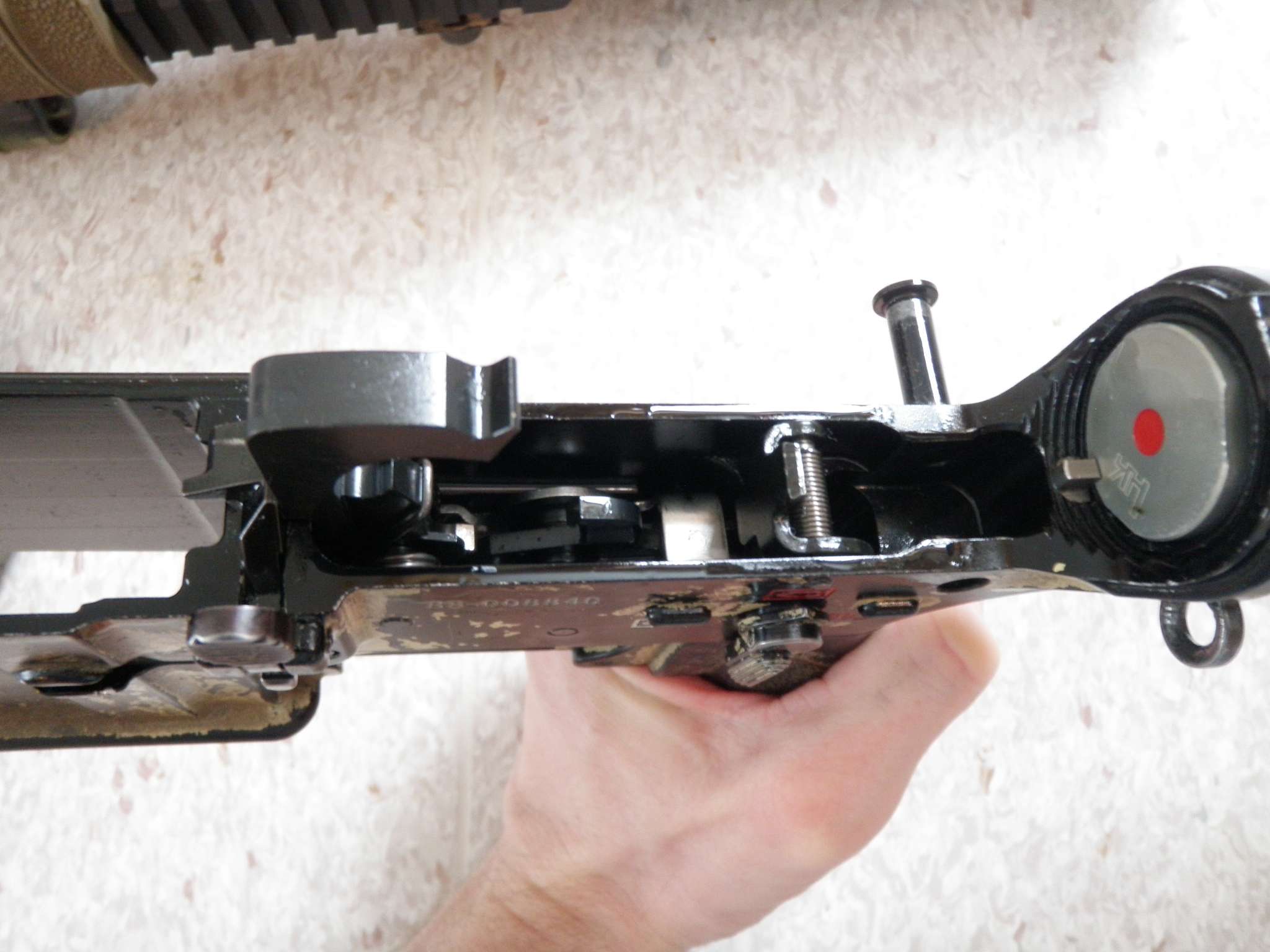 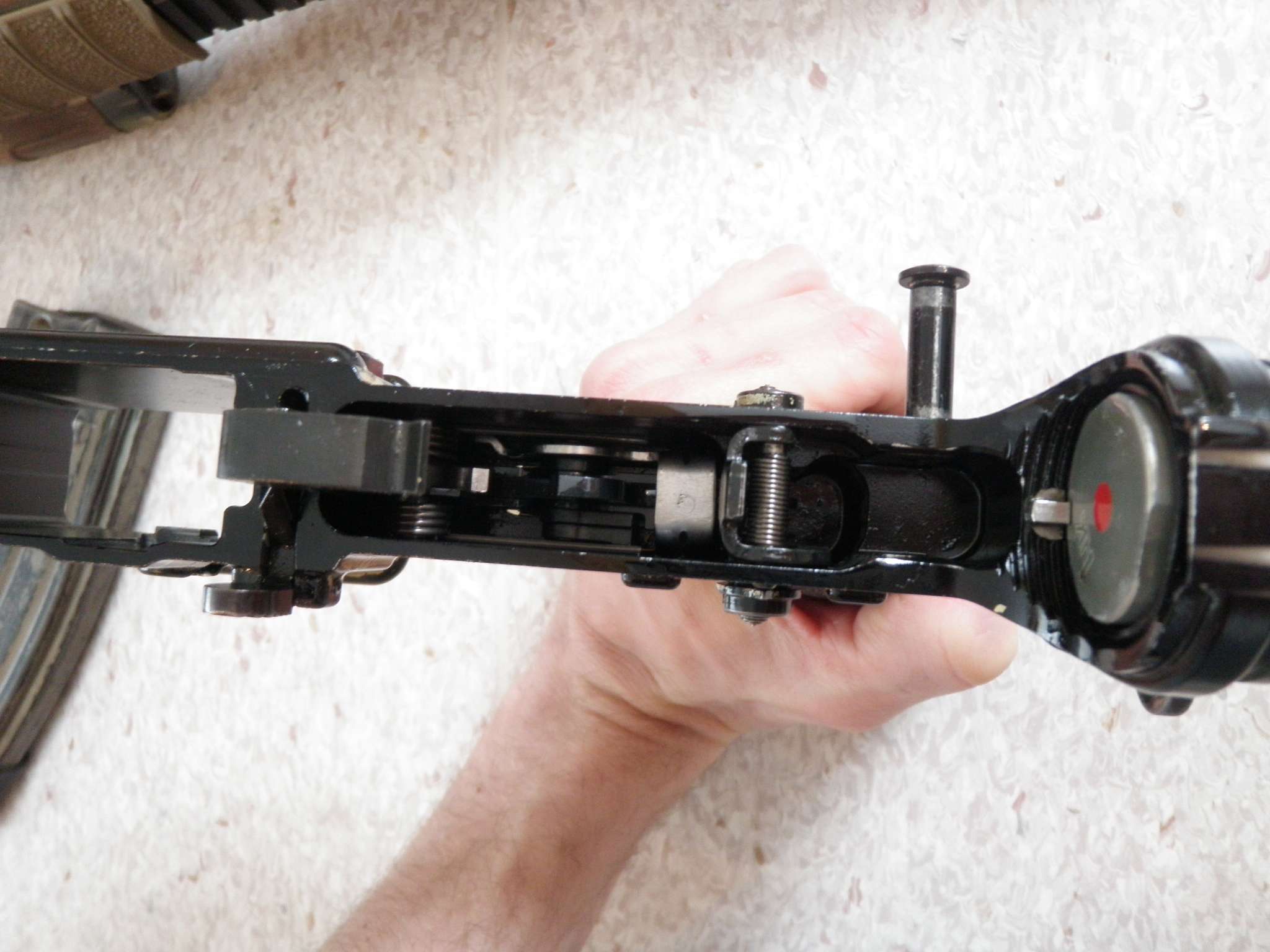 I shot 2500 rounds through the gun after the modifications were done, and it worked out very well.

It is still as reliable as ever, and there is more creep in the new trigger than with the stock one, which I actually prefer, and a lighter break. The creep was not there initially after the switch, but has developed with some use.

Staff member
Moderator
Here is a pic showing the piston I replaced on the right, and a brand spanking new one on the left: 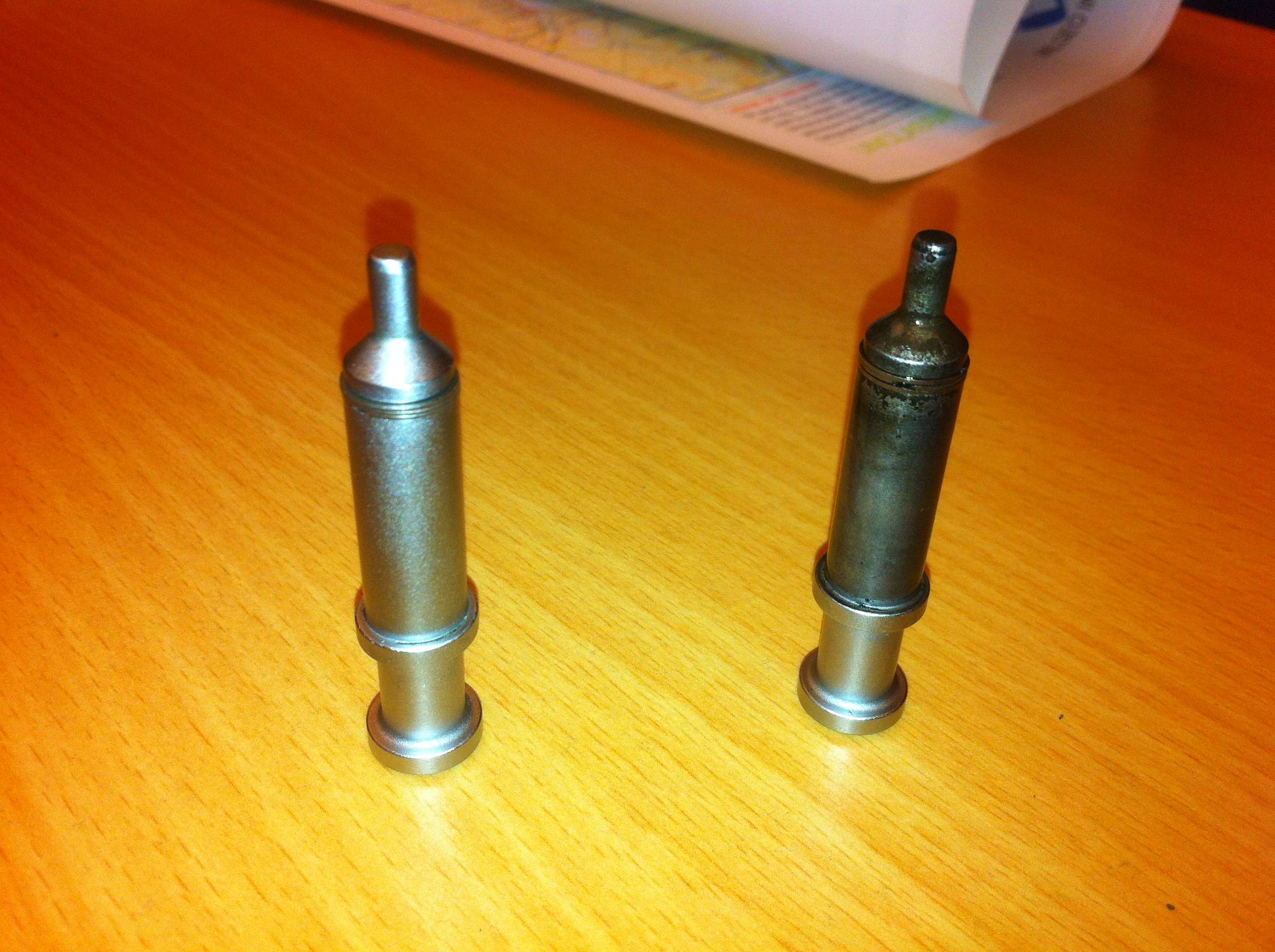 I have only removed visible build up, so the discoloration is quite clear.
No wear on the piston itself, but the tech who mandated the replacement said that the rings were a bit worn.

Staff member
Moderator
Some accuracy info on the ammunition we use, and some that we have tested with the gun.


5 shot groups were fired at 200 meters. 4 shooters were used during the testing, with an undisclosed magnified optic (my bet is a S&B Klassik 1.5-6x scope).
Each shooter shot between 12-20 strings of slow precision fire, for a total of 63 strings per ammunition type. All groups have been used to determine average group size. Weapons had between 5-10K rounds through them at the time of testing.

The acceptability requirement for us is no worse than 2 MOA from the 16.5" gun, so all ammo tested passed that requirement.