I have normal holsters that work well, but I'm having a hard time finding a [good] drop leg or drop thigh holster (being a somewhat obscure-ish gun).
Anyone have suggestions?

I don't think safariland has one, but it's somewhat tough navigating their "holster finder", so who knows?...

The use case is carrying the gun with a backpack that has waist straps (hiking/hunting/so on). I'm open to other carry methods as well. Thanks in advance all!

Staff member
Moderator
WARLORD
Having to walk anywhere wearing a drop leg holster is an absolute last resort option for me. I would highly recommend looking into ANY other method of carry if you are going to be walking more than a few hundred meters wearing it.

I have worn a belt set up with a drop and offset Safariland ALS holster, but the backpack waist straps sat on top of the gun belt. Even then, if I was walking long distance I just wouldn't bring the pistol. Im certain theres better options out there Im just not familiar with them.
N

BooneGA said:
Having to walk anywhere wearing a drop leg holster is an absolute last resort option for me. I would highly recommend looking into ANY other method of carry if you are going to be walking more than a few hundred meters wearing it.

I have worn a belt set up with a drop and offset Safariland ALS holster, but the backpack waist straps sat on top of the gun belt. Even then, if I was walking long distance I just wouldn't bring the pistol. Im certain theres better options out there Im just not familiar with them.
Click to expand...

That's a good point. Chest rigs are the only other option that I can immediately think of, but I can't imagine that being too comfortable.

Safariland has a neat paddle holster that sits a little lower and has a leg strap, so it's more like just a low sitting duty holster. Unfortunately they don't offer it for the USP 9 tactical though.
J

Have you thought about the Gunfighters Inc rig? Looks like they have the usp.

There should also be options from safariland, blade tech, and others for a "drop/offset" mounting to clear armor and such.

Sent from my SM-G955U using Tapatalk

If you have to run it on your leg, I would go with Safariland's DFA and Leg Shroud, then a holster mounted to it. This is my patrol set-up and gives me the drop I prefer without the sloppy mess that is an actual leg rig.

You could also go with Safariland's low ride UBL with your choice of holster. Some will also run a leg strap through he UBL to keep it from flopping around.

I run rucks with the Safariland UBL as mentioned in the second half of WAVandal's post: 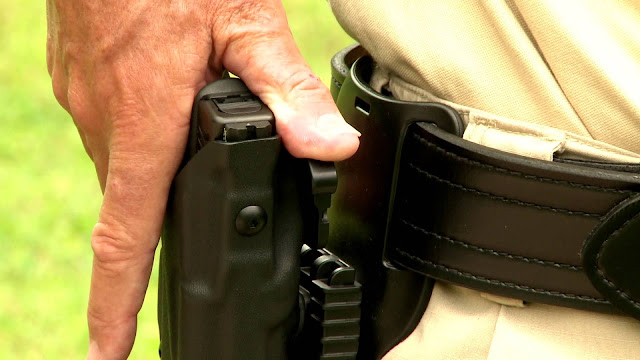 UBL with a strap (neither of these are me): 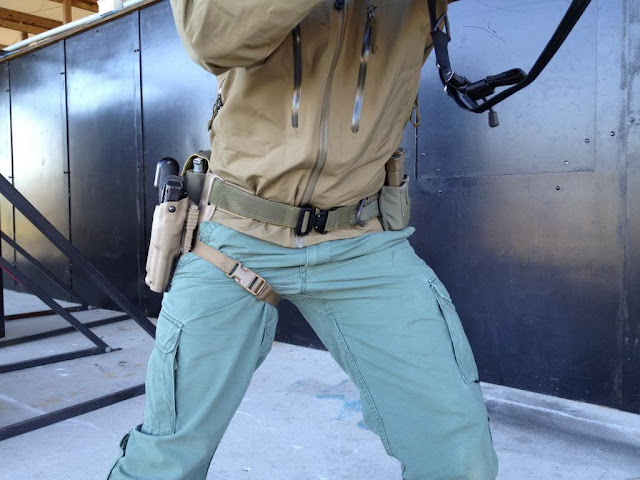 It is a little extension strap, rigid, so no need to tie to the leg but you can if you want as shown above. They come in several lengths, but generally favor the long one when rucking. I also have a QLS so can mount it all up without the weight of the gun, and kicking the gun out that 3/8" seems to help with strap clearance while donning/doffing as well.

If doing something potentially dangerous (aside from the gunfire) like airbore, maritime, or helo ops, I'd get an MLS instead as the breakaway may save you if you get snagged, plus it's a requirement for the folks that do most of that.

Here's me in a Crossfire ruck, BFG SplitMinus, and whatever ALS holster body on the longer of the several UBLs:

Yes, everything is camouflaged so it's hard to tell what's going on, but there it is. The pants/gunbelt is concealed beneath the ruck belt, but the gun drops below it so clears fine.

Also, here's the list of supported USPs on the Safariland site. Your gun will fit one of those:

Thanks all for the replies! Let me dig into it a bit.


A stretch goal of mine is to find a rig that can support my tlr1-hl light I have attached to the gun (with a gg&g rail adapter). It doesn't seem like anyone molds kydex to that though unfortunately.

Try finding local Kydex makers. Many are starting to pop up again, and Kydex is moldable. Many of those folks will do custom work for your gun/configuration.

Get someone really interested in the work, and you may find they'll run it to mate up with the Safariland screw pattern so you can use all those accessories to mount it, and then don't have to change holsters if you decide later to ditch the drop extension, etc.

If not HPG, one of the hunting chest rigs.

The HPG bag is nice, but remember you are now getting into carrying a chest rig. Shoulder straps on top of shoulder straps. Does the sternum strap for the ruck get in the way of the pistol? Etc.

Another option may be to mount the pistol to the ruck belt. It can be done, especially if you have molle waistbelt, but don't forget to not leave the gun behind. May be good to do a modular (MLS/QLS) system so you can switch the gun out without removing it from the holster then, for less administrative handling.

Also have seen people do front packs, tied into the waist belt. Get a fannypack sort of thing (or something like the Safepacker...) and clip it to either side of the waist belt. It needs to be released to get to the waist belt clip, but does not itself interfere in the ruck wearing. Then it's right in front of you, at belt, height, can be drawn much like AIWB, so is fairly natural and no twisting or reaching which can be an issue when all rucked up for some folks.
You must log in or register to reply here.
Share:
Facebook Twitter Reddit Pinterest Tumblr WhatsApp Email Share Link
Top