Staff member
Moderator
VIP
We have been issuing basic IFAK's to all personnel for some time. During my quest to get this done, I contacted a lot of agencies to see what they were issuing for a white paper. I would like to start a thread here of real world apps, equipment and training is working, to expand our trauma aid program and potentially add equipment.

One of my guys sent me this last night. Suicidal lady lock herself in bathroom and tries to saw her hand off. TQ was applied and pressure dressing prior to medics arriving. This officer had a previous TQ app on a stabbing victim who was cut on the inside of his right arm, officer believed brachial artery was cut so he applied TQ. It wasn't, but better safe than sorry.

Not looking for a critique of skill, more of a continuing documentation of using equipment and training.

You should talk to guys like Kerry Davis and Caleb Causey.
Their kit and training has been saving lives left and right.

Staff member
Administrator
Kerry and Caleb are mods for the FB page, they should be here as soon as they can.

Local protocol is TQ placement 3-4" above injury. Unknown if the responding agency's protocol is high on the limb or if the medic chose to deviate. It worked immediately, they had been trying to stop it with towels and pressure on scene prior to EMS. The CAT shut it off like a faucet.

Eric Southland who runs the Tampa Tacmed stuff has been building an excellent collection tool for LE uses of TECC concepts or kit for a little while. I got pointed at it a little while back when I was talking about some of the challenges Sztajnkrycer and a couple of others were having with sample size for analysis. There is a closed FB group, but he runs a wordpress site and the link below is kept up to date as far data

Thanks JNT for spreading the word. We just updated the layout of the document and added some new data on tourniquets. I hope the info helps.

Bill, I'd like to add your event posted about to the document, can you email me some of the details? E 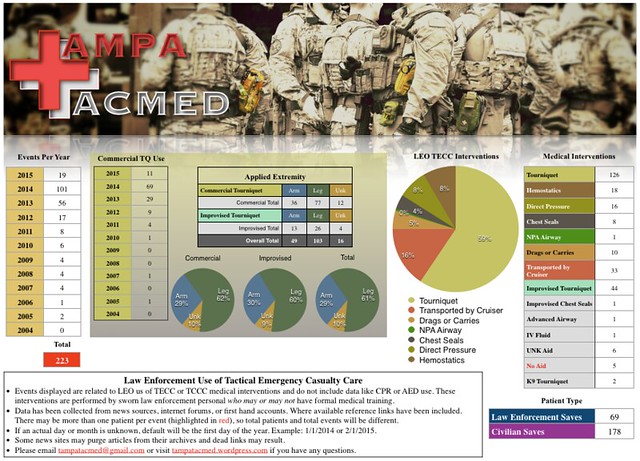 Not first hand application, but if you Google Kyle Thiry of Evansville PD (Indiana) I read news reports of 3 different times that he has applied Tourniquets. One Motorcycle accident, one car accident, and for the life of me I can't remember the third.

Bill, are you interested in mil data, or just LEO/EMS?

Staff member
Moderator
VIP
Eric - Sorry lost track of this thread, I will email you details tomorrow.
Naveronski - Mainly looking for LE applications since most departments suck at this, we are getting better as an industry though. I can weed through the military stuff if there is a need to track that. Or start another post?
S

Department wide we have had a few in the past few months. TQ wear on body is mandatory for us if in uniform. Carry of a stocked "go-bag" in the front passenger seat is also mandated (OLAES x2, TQx2, QK gauze x2, gloves, etc).
Had a suicide attempt, paring knife up the left interior wrist, pretty decent bleed due to intoxication but still able to fight the officer. Officer fought them and then applied TQ, bleeding stopped. (Not on scene)

Had a suicide attempt with a 9 inch chef's knife through the abdomen just below the belly button at an upward angle, buried to the guard and removed. Lots of blood in the house but surprisingly little active bleeding when we made entry. Guy was in bad shock and getting clammy and cold. He got QK and chest sealed on scene by us. EMS made no further intervention on scene, just packaged him and pushed to trauma center.
A

I've been pushing TQ use to everyone at our agency since the mid-2000's. A lot of the guys are on board with it and the dept now provides a mini-IFAK (including a CAT TQ) to everyone. Many of our patrol guys are carrying CATs, SWAT-T's, and SOF-T's.

A few months ago, one of our guys responded to a citizen who had mangled his arm in a chainsaw mishap causing arterial bleeding to his (left?) arm. CAT was applied and most definitely saved his life.

Incidentally, the responding Fire/Med personnel were *not* on board with the CAT TQ. They took it off and applied a blood pressure cuff, and made some comments about "where do you think you are, Iraq?". This led to some very pointed conversations after the fact and that particular fire agency was brought kicking and screaming into the modern age. It was a good opportunity to get that sorted out. So, check with your Fire/Med people to see if they are switched on, or not.

At another local agency about 18 months ago, they had an active shooter in a pickup who shot up 2 police stations and then lured pursuing officers into hasty ambushes. He would stop and then engage the patrols through his driver's window (using either a AK or a SKS). In one of these, a patrol Sgt bailed out of his vehicle and was using it for cover (rollover prone behind the rear wheel, but his legs were of course sticking out beyond the wheel, parallel to the vehicle) when he took a round in his thigh (skipped off the pavement and travelled under the Crown Vic). Other officers arrived and applied a SWAT-T, which saved him from bleeding out.

Bill, and anyone else - I have an extensive compilation of news stories in which TCCC methods (mostly TQs) have been applied in CONUS, mostly by LE. When I go back to duty in a few days I can email it to you if you PM me with your email.
You must log in or register to reply here.
Share:
Facebook Twitter Reddit Pinterest Tumblr WhatsApp Email Share Link
Top