#21
Mark Housel of L and M Precision offers his own adapter- skip supporting Suarez if you have issues with him. Mark has been doing RDS stuff since the beginning going back to the Lightfighter Forums. Just did a 26 mill for me last month with a 2 week turn.

#22
MAC Defense also offers an RMR solution for G43/48 if you want your irons forward of the optic.

#23
I thank you for this information Earl An, my wallet does not.

#24
I’ll add on to this for anyone else looking to go the route of an RMR on a 43. I’ve done a bunch of sifting through the interwebs and some testing of my own and here is what I’ve come up with.

1st is the Dueck Defense / Competition style of Dovetail mount.
Pro's: Not a permanent attachment method, cheaper, can be mounted at home with proper tools.
Con's: Dovetail is a potential failure point, RDS sits very high, no back up irons unless it's the Dueck mount.

2nd is the milled slide. Within this there are three options I have found.
A) Shield RMS/RMSc/RMSw and whatever else shares that foot print.
B) Trijicon RMR/Holosun 507c via an adapter plate to widen the slide.
C) Aimpoint ACRO direct milled.

I'll address each of these with my own thoughts and experiences.

I had a 43 milled for a Shield RMS by Maple Leaf Firearms that I thoroughly enjoyed using. The optic sits so low that standard 43 sights co-witness enough to get a back up sight picture. I loved that with the standard RMS I could change the battery without removing the optic. I disliked the lack of tactile clicks when adjusting the impacts. However, through a stupid mistake of my own, I managed to drop the 43 from my lap onto the concrete of the garage floor. Of course it landed glass side down and a lovely crack went straight through the polymer window. Since I sold this slide, Maple Leaf has released an adapter plate that fills in the Shield RMS cut out and allows you to mount an RMR above it. I'm not sure how high your BUIS need to be, but it seems like it could be a solid option for using an RMR when you already use a Shield RMS, and it has recoil bosses which I'll talk about next.

I am currently running a slide from Suarez international with their NSA plate for the Glock 43. It allows me to run a Type 2 RMR on my 43 which is my go to optic on my other full size Glocks. All of the stuff with Gabe aside, my major complaint is a total lack of Recoil Bosses on the plate. The pocket for the plate is longer than the RMR so I switched the Rear sight around in order to give a third point of contact against the RMR back. I have witnessing marks all around the optic, but I just have a bad feeling the zero will shift. I'm intending to go to the range and give it some bump testing to see, but I will say it has not failed after the 500 rounds I've put through it. Since I purchased it, I have found out that MAC Defense Industries l&m precision gunwork and Primary Machine both also offer an adapter plate method similar to the Suarez, but their plates both have recoil bosses. MAC defense does an Irons forward option that I would have preferred.

Finally is the Aimpoint ACRO. Personally I would have loved to do this route, but I can't get behind the short battery life. However, having an optic that I could beat the crap out of with an enclosed emitter and replace the battery without removing it would be amazing. I have seen ATEI and Victory First both market slides for the 43/43x/48 with the ACRO. ATEI even has a SHIM sight that let's you do a smaller lighter rear sight.

#25
BassFlats&Beyond said:
I have heard the sheild optics have durability issues. Can anyone else confirm?
Click to expand...
They're not an rmr.... Don't sage dynamic it you should be just fine. I've been running one on a g43 and now g43X as a supplement to an rmr'd g19 for close to a year. Id have to check my notes for an exact round count but it's somewhere just shy of 1k rounds

#26
ParaSpartan117 said:
For some. As somebody who has for years owned his products, attended his training, and spoken to him personally, I can recommend his stuff based on my experience. Others want nothing to do with him, I'm not sure if they have personal experience or if they're just regurgitating internet propaganda (regardless of validity). I just like to keep an open yet critical mind and get the good stuff wherever it comes from.
Click to expand...
As someone who personally dislikes/ distrusts Gabe based on personal experiences, I've only had a single QC/ failure issue with a OST/ SI product. I don't have any of his slides any more but the ones I had were good... Not like he's running the mill... 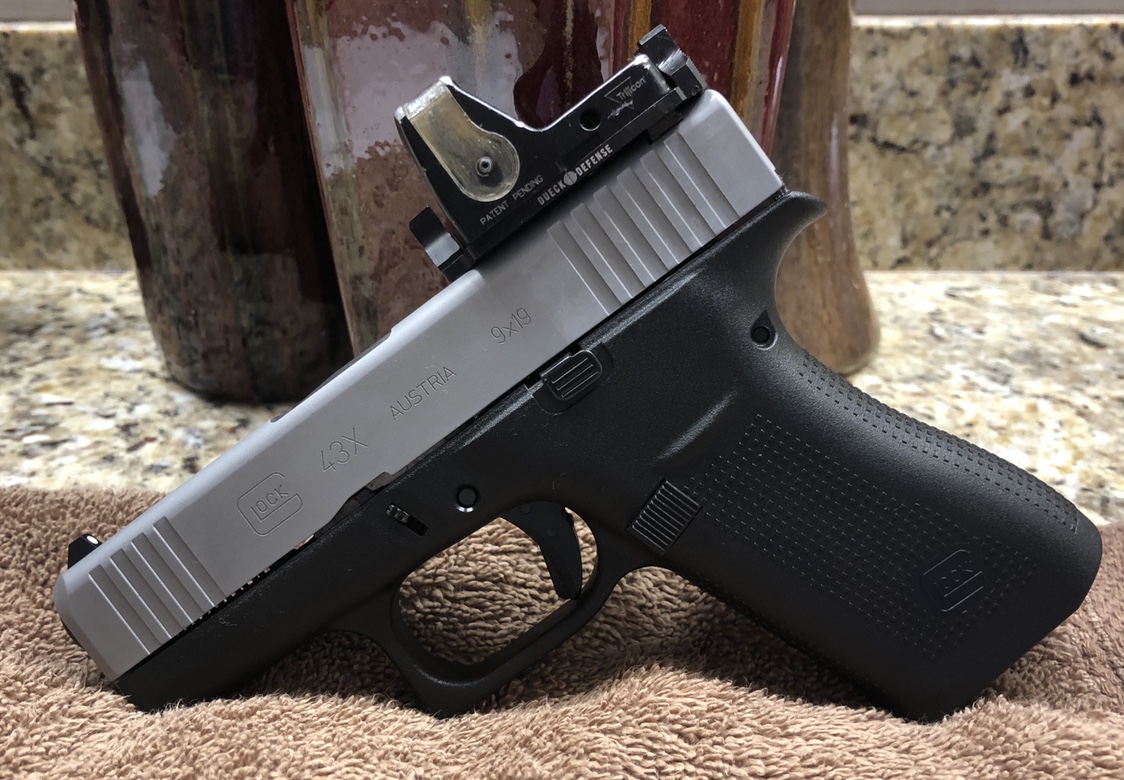 Only downside is that when using this mounting method, the 43/43x/48 will not fit in the RCS Perun.
Click to expand...
Or a bunch of other holsters

#28
I got my slide back from MAC Defense a few weeks ago and have 350 rounds through it to date. I can not recommend his work enough! The optic plate is rock solid, with recoil bosses at the front and it is milled in a manner that the tight tolerance on the front and the rear require a little pressure to get the optic into place. With the iron forward set up I did have to flip my rear sight around so it looks a little wonky, but don't let that deter you, they have an option to purchase a set of ameriglo irons with your milling package.

My primary concern was minor drops and single handed manipulation where the Suarez slide failed me in the past. So far it has passed every test with flying colors.