#1
So...there are already several good AAR's for this class. Rather than re-hashing the same old shit or doing a full transcript, here at some points that stood out to me.
(NOTE: I'm a cop...not a fucking composition major. There's probably typos)

My Background: Just another dime-a-dozen LE guy who likes weapon/tactics/shooting and invests into my trade.

My Gear:
2x ATEi'd Glock 19X's wearing Type 2 RM06's. One is a carry gun; the other is nearly identical but comp'd. I ran MEN 124gr ammo.
I ran the first 1/2 of day 1 (AIWB) with a JM Custom holster and the last half with a borrowed Phlster Floodlight borrowed form a co-worker. I ran my Safariland ALS duty rig on day 3. Belts were Firstspear gunbelt on TD 1 and an Arcteryx belt on TD 2.
Observations: I need a better, dedicated belt for AIWB, and my AIWB holsters all required adjustments to sit the gun higher for better grip.

Who was there...
Normally, this is not something I note, but when your class includes multiple alumni including other notable instructors and some students attending for their 3rd or 4th time, that's something to note. Initially, I found this odd, but given the "drink from the firehose" wealth of knowledge, follow-up classes would not be in vain. Without a doubt, everybody on the line executed some high-level stuff at one point or another. Even if it was only one or two times per day, everybody saw what the possibilities were. It was also a pleasure to watch Donovan win his 2nd Black Belt patch...dude can shred.

Why did I take this class?
I took a deep dive into red dot pistol about the same time as AIWB From about February to June of this year, I had used Jedi's videos to give me a fundamental path to follow. I did a hard grind, doing reps for a few months before deciding to cool my regimine when I had plateaued around a 1.50ish draw. I continued on with red dot with reasonable success...to the point where I could exploit it in 90% of the time over irons. After a Langdon class in June, I gave pistols a rest and returned focus to my neglected precision/long gun fundamentals. I can say I had almost no prep in the weeks leading up to this class due to my schedule.

Knowing that I had some difficulty finding the dot on occasion and I had some holes in my draw, I knew I needed help. With that I knew I needed actual individual attention and guidance. Hearing Jose Gordon give high praise about Jedi's ability to diagnose shooters, I was intrigued and enrolled in the closest MSP class I could find on the roster.

What did I expect?
Given that I felt like most pistol courses I had attended lacked significant personal commentary. That or they were case where the class was slowed to a snail's pace because some beginner(s) didn't read the course description or watch the pre-req video. Because of this, I had very conservative expectations.

I also knew going in that I could do a 2.75ish Bill Drill, consistently shoot 90+ B8's or better, and have even pulled together a the occasional sub-5 second FASTest's out of my butt on occasion (while making my home in that 5.25-5.30 range from concealment). A skill's no-man's land where coins, pins and patches seem wildly out of reach but many industry "standards" are easily overcome. While there's plenty of room for improvement, I was skeptical I would see significant time/skill shifts in 3 days. Stating that, I would be very happily surprised by the end.

TD1 - AIWB observations
It is very clear that Jedi's experience in martial arts is blended into his shooting techniques. During the numerous demonstrations showing the human body's strength's and weaknesses as they pertain to stance, recoil, etc. I kept thinking to myself: "Why has nobody else ever talked about this?" Jedi's technique was broken down into small bits and sutured into a complete technique rather quickly. It took me a few reps but the philosophy makes sense. Build an efficient technique, and focus on the technique and the results will come. I had previously fallen into the trap of "go faster" and making the mistake that more aggressive, violent movments practiced indefinitely would get me somewhere...eventually. Maybe after 10-12 reps of remembering to "stab" and riding "the wave" and trusting the technique, another 0.15 was easily gone from my 1.50 AIWB standard. By the end of the day, I even managed to steal a t-shirt in a 1-shot draw @25y on steel shoot-off. Even tired, I had some solid personal bests in the MSP standards shoot at the end of the day.

TD2 - Red Dot observations
Given the techniques presented on TD1, finding the dot had more or less worked itself out. I learned how to work the dot so it would present itself from the 12 o'clock in the same manner...so long as I did what I was supposed to. "Speed" was touched on in that the sights/target and what we see would dictate our speed and not our arbitrary feeling of what was "fast". Static drills were broken down and alternate to shift from speed-accuracy-speed-accuracy. TD2 ended with MSP standards. I took my fastest, PR Bill Drill at 2.20s and completed all standards with no misses.

TD3 - RD continued observations
Day 3 began with everybody's favorite....B8's. Jedi talked about 10y zero and how it compared to 25y zero (and a little to 15y) in terms of logistics (time to zero) and the minimal (3/4" give or take) shift most rounds see when shooting a 10y zero at 25y and how impact shift is often less than shooter error/wobble. Tracking the dot and letting it fall onto target, I shot a clean 100 B8 w/ 5x's with a center POA and a 10y zero. I found it much easier to allow the dot to track vertically rather than fight the wobble of holding center of the X. 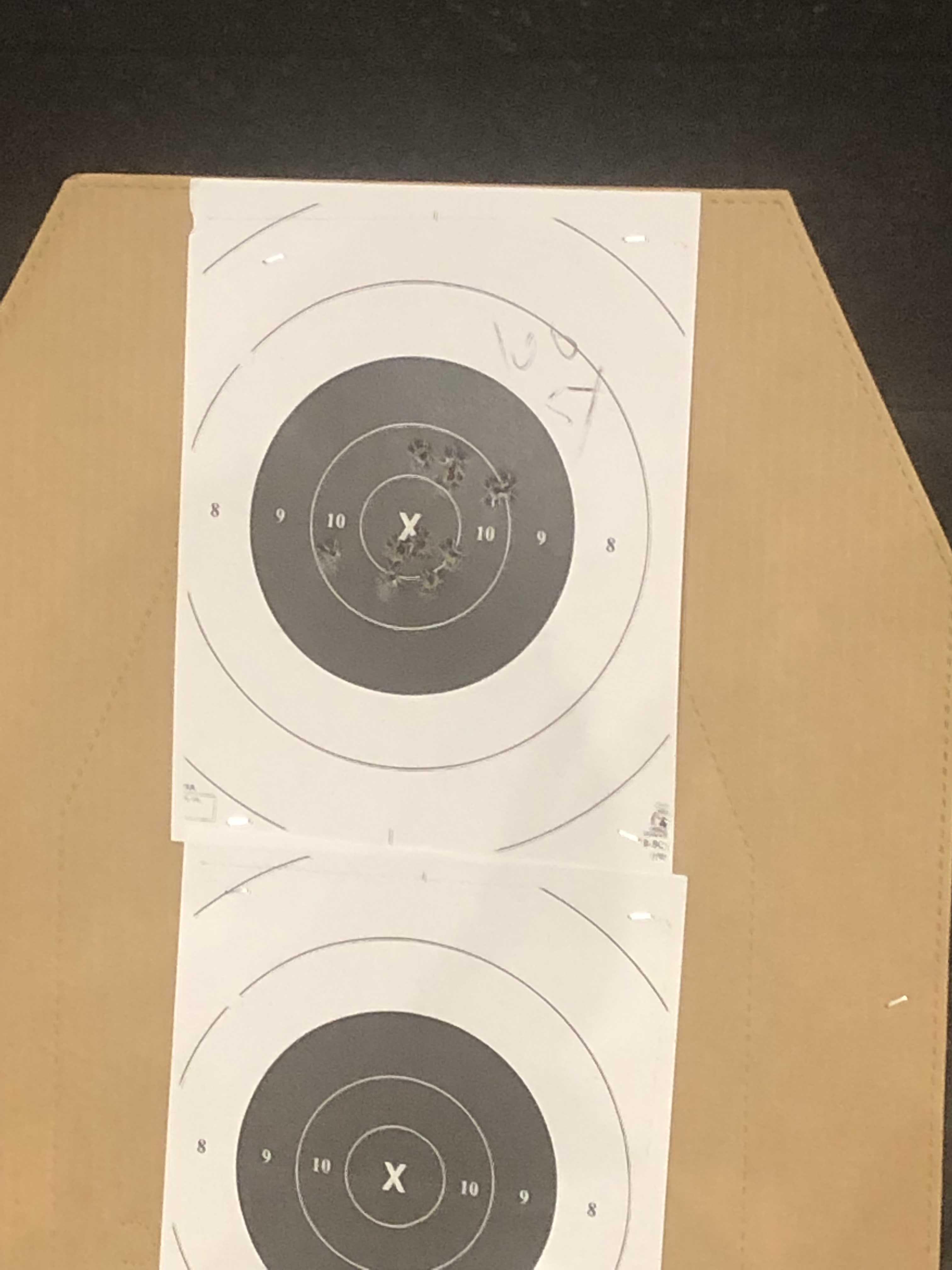 Then we had the always fun strong/weak hand shooting segment. One thing I noted was the emphasis on chosing a method not by how tight groups were but by the quickness/efficiency that the user could return to the dot and reengage so long as the accuracy was acceptable.

TD3 culminated to a full stage setup for time where most class skills were put to the test. After that, we did the MSP standards one last time. While my Bill Drill was not as good as the previous day's, I ended with a personal best of a 2.12s 3-2, a 1.17s 1-shot to A zone @ 7y, and a 1.43s for the 1-shot to A-zone at 25y. Again, even with my mental/physical tank on "E", holding to the technique rather than trying to "go faster" yielded positive results.

In all, I was very pleased with my performance, the results, the class, and the whole experience. Good shooters, good people, good class.

Other Thoughts
- If you run an RDS in any serious capacity, this class should be mandatory.

- So long as it is properly selected, installed and trained on, RDS on a pistol is a no-brainer. From what I recall, there were 3 dot "failures" in class. One was a user mounting error that didn't surface until TD3, and the other 2 were on older optics with inordinately high round counts. This is no more significant than weapon or optic failures that I have seen up to this point. Things are far better than some (older) industry professionals would have you believe. Fear not the red dot; the juice is worth the squeeze.