#21
TheTick said:
Do I "feel it"? No, because I'm sure that many other people here can attest also, when you're locked in on a job, you just get to work.

But, "yes", I am aware that I'm not wearing full hard plates. I'm working to rectify that currently. My PD puts the old SWAT vests with plates in the trunks, but they are cumbersome and time consuming to put on and have to equipment attached. They are only ballistic protection. To me, the name of the game for Active Shooters is the fastest possible armed response and the shit in the trunk does not equate to that.

I'm in the process of figuring what PC to buy to mate to my D3CR and will bide my time until my current SWAT vest gets replaced and I will take my "expired" Level III multi-curve ProTechs and put them in my PC.

For what it's worth, the distributor dicked the dog HARD when we were getting our newest vests and made it up to us by giving every operator (35 +/-) a small hard plate that fits in a large trauma pocket on our patrol vests and I have that up front covering me from top of the chest to top of my stomach.

It could be worse.
Click to expand...
Rectified with a Velocity Systems LWPC with a set of discovered left over "expired" Level III multi-curved plates.

D3CR is mounted and in business.

Will have an update, have a few things on back order (Med Supplies), etc.

#23
I run a Haley Strategic D3CR. Thus far, I have yet to have an issue with it. I am able to run my 4 carbine mags and 2 pistol, med stuff, chemlights, and blade. I like the setup enough that I will rotate between just the chest rig, and running the panel on my pc. Only had experience running it through a class or two and some pig hunting.

#24
I've used a few different chestrigs in my time.

In the '90's I started out with a 42 Pattern Arktis rig. 3 triple 5.56 magpouches in the middle (Also fit 2 x 7.62 G3 mags) and two GP pouches, one on each side, a map pocket behind.
I strapped my radio on next to the GP pouch and a compass pouch for compass and a multitool on one of the shoulder straps. A very basic chestrig design, but very useable. Only negative was the X straps around my back, that chaffed my neck by end of a week.
The 42 Pattern Chestrig was used during vehicle borne scout missions. If I was dismounted for extended periods, I wore a daypack as well.
I still have that chestrig in my locker for old times sake, bombproof construction.

Went away from chestrigs for a while, using beltgear and combatvest setups in an infantry role.

By '03 when we went to Iraq I got a Blackhawk STRIKE chestrig with a front plate pocket. At that time we didnt wear our armor at all times, but had it with us in the vehicles. So I chose to run one of my plates from my vest in the platecarrier when out and about. Pretty similar setup to my 42 pattern rig. The STRIKE rig allowed for a H pattern of the straps, which was more comfortable than the X and kept it away from my neck.
I also played around with a combatvest and a HSGI Wasatch platecarrier/chestrig during that deployment.

After I left the Army in late '04 and began contracting in Iraq, I used a Diamondback Tactical Low Vis rig for a while. It also had the X straps, but since they were thin and not wide like the Arktis rig, they didnt chafe the neck as much. Great for low pro missions with low pro armor and a shirt on top. I wish, I still had that rig, if nothing else, than for nostalgic reasons.
I then went to a full Paraclete RAV setup, then a Paraclete HPC setup for most of my time.
Later on, I got a Eagle Poul Howe UCR rig, which I didnt use as much since it had thick X straps that bothered me, oh well.
Eventually around '11, I got a Gen 1 Mayflower LPAC armor set with a clip on molle panel, that I set up with pouches to fit my mission and found that, this was the best way to carry a chestrig, clipped onto my armor and detachable if I needed armor, but no fighting gear, but fast to clip on if needed. In my humble opinion, Mayflower makes the best chestrig setups in the business.
H straps are more comfortable than X straps, but clip on chestrigs to armor are the best option. Less straps that go around your neck and weight savings on top of that.

#25
Addendum to above post.
I also ran a BFG TEN Speed chest rig clipped onto my MRC LPAC for an ultra low pro setup.
Had to cut the straps and mod the body of the rig with buckles to make it work, but that was seriously a low pro setup.
H 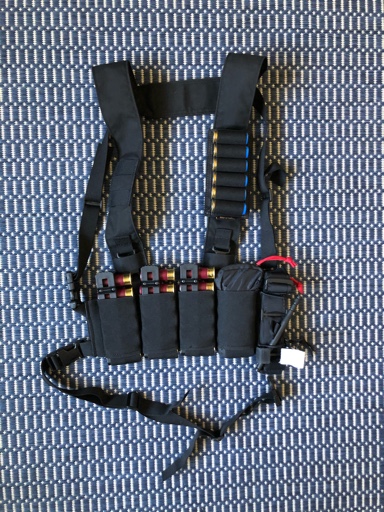 I envision using this setup for home defense and training. It’s simple and light weight. It gives me a 38 round capacity with 7+1 in my gun. What do you think? Anyone else running a similar dedicated platform?

#27
My EI rhodesian, 12 mags cap, admin pouch with flash light, 2 TAG GP pouches with med kit and lum sticks... this is a re pro of what i set up in 2014 when USMC was leaving Leatherneck, it would go over my PC Gen 2 incase things got real. (My ammo load out went from 6 to 12 magazines when most folks left while i was mayor cell shutting down the place.) Currently has a 3+ ceradyne plate with backer...

I dont forsee a need for it, its just a momento at this point.

#28
MC Weesatch with side plate adapters, currently slick, going to be my PC incase my Guard obligation becomes more then advertised.

Staff member
Moderator
#29
I've got a BCM 03 split front rig (damn, I wish they were still being made!) that I run at classes when I need more ammo than I can carry on my belt. I really like the split front for a couple reasons.

When it's hot, I have plenty of ventilation space on my chest where it seems ventilation does the most good.

When going prone, having the gap in the middle allows me to lay down without laying on my mags. This makes access to at least one or two mags easier, in addition to being more comfortable.

Very quick and easy to put on and take off, no need to buckle it right away. This is good for me in both class environments where I can grab it super quick, as well as in case of emergencies where I decide it's the right choice.

I do almost wish the pouches were flapped instead of open top, but the bungee retention is largely good enough. Additional webbing space for medical and additional magazines is present, as well as a removable hydration pouch. Good all in one, yet still modular, setup.
H 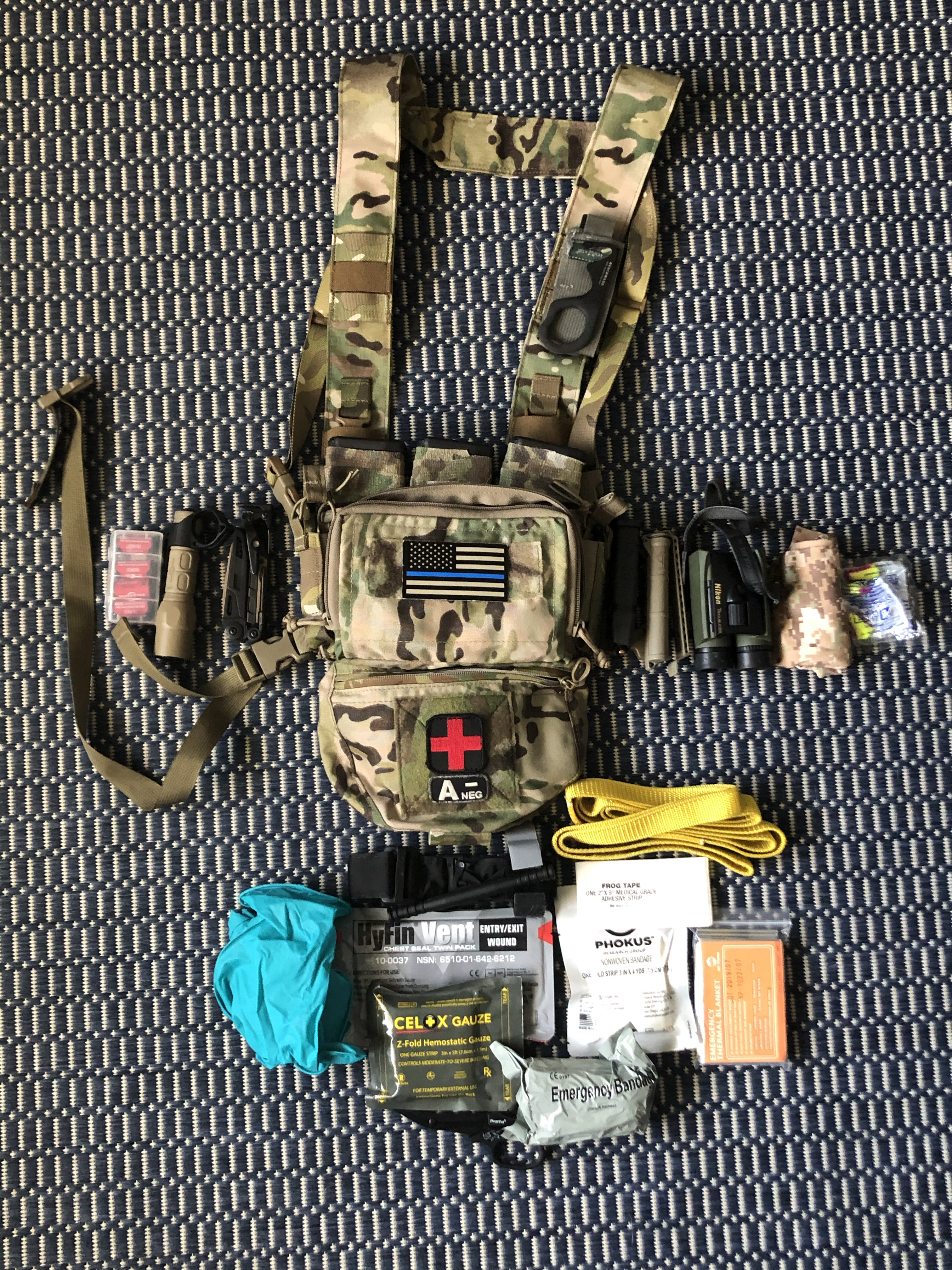 My rifle chest rig and contents.