Staff member
Moderator
Are there any quality options to mount an Aimpoint micro to an A1 carry handle that are readily available today? The primary concerns would be durability (ie. not coming loose or breaking) and keeping the weight down. I have seen a micro footprint-specific mount, but they seem to be out of stock. There are also a large number of picatinny mounts, but durability and quality are a question with many of them.

Does anyone have experience doing this, and have a suggestion for what to get? Thanks much in advance!

Never done a micro, but I wouldn't want anything up that high. If you have to use the carry handle gun without modification then I'd look into the M68 gooseneck. Rock solid if installed right, and while it may look silly and bulky from the side, it is slick to look through when aiming, takes no footprint in normal operation.

Not mine, and a Holosun, just found on the internet, but similar:

The M68 mount is very for that so the one cross-slot is very far forward. Be careful bolting the mount to the gooseneck to be sure it is clamped solid, etc.

Make sure you install it right, with the forward clamp, not just the screw under the carry handle. Not shown above.

When or if C7 uppers are back in stock, I plan on mounting a Type 2 RMR to a Trijicon carry handle mount for it.

Not what you asked for, but is an alternative and readily available. My goal is to get a lightweight pencil barrel carbine that is along the classic lines yet still very functional for modern HD or general purpose duties.

Not to piss in Shoobe's cheerios, but, there are folks that are asking if the legacy carrying handle, with a optic of some sort, isn't a viable option these days. If you are into a higher height, for various reasons but usually includes passive shooting, then this is a very solid way of doing it.

I am doing some work for some dudes that are contemplating this very set up. Call it the "Son Tay" mod if you will. But instead of 100 mile an hour tape, there are actually some decent mounts that lock into the "U" channel. So yeah it's probably a better lock up than some stuff on the market.

I would only add that this is for a very specific mission set, namely CQB, where traditional, positional shooting isn't foreseen. The idea is to get the head up, in a higher plane, for better situational awareness, rather than scrunched down on the stock. This allows binos to move behind the RDS and use the red dot for aiming, vs the IR laser. This is up-right and highly mobile gunfighting, as opposed to traditional fire and maneuver, where you might be taking a knee, or even proning out to support your buddies. So the optic height is adjusted to allow for it.

Is THAT high still good? Haven't tried it as I have no carry handle guns now, but it seems it would be even higher than the current mode of high mounts for passive NOD use (which I've tried plenty, you know that!

I may have a removable handle somewhere, and may even have a through-handle screw mount... might have to try it to see if I can rig it up.

Okay fine. After a long 7 am meeting I took some time to screw around, found enough to stick an Insight MRDS on a crap (had to file the cross slot!) carry handle mount, on a trainer. I seem to have purged the real carry handles so aside from no time to go to the range or control the sunlight, I just did this with lights out here in the basement.

I wouldn't want to shoot it anyway. Keeping the head straight I have NO contact with the stock. In the old days I tried that (and countering it with pushing into the eyepiece as a third point of contact) for night vision scopes mounted to the carry handle (or the claw mount for HKs, or so on). Poor results.

The best result is as shown, I can tilt enough to get contact, but it's a jaw-weld, and I bet even in 5.56 would be uncomfortable when it goes bang I bet.

But... tell me more. Maybe I am missing something. How are your guys shooting like this, presuming not just making do with promasks or visors or so on.

Staff member
Moderator
I will add that I already use the FAST mount with a micro red dot on another rifle, and like it quite a bit. This is an 11.5 pencil barrel with a FSB and C7 upper. I was hoping to get a mount for an aimpoint micro specifically, so the extra height of a picatinny mount would not be there.

Okay then. Hadn't thought anyone would do that. Good system, I liked it when everyone made that as their standard base but it went away so long ago it didn't even occur to me to search.

KZ makes one. They seem a fine maker, I have seen and used some other stuff, it's as it purports to be, no issues with quality, materials. 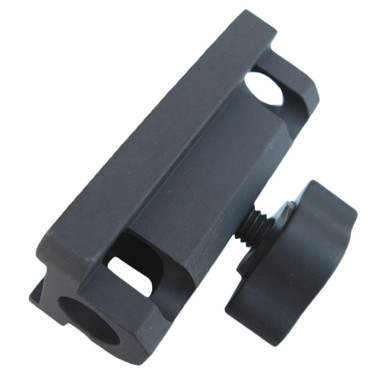 botach.com
Since out of stock I assume this is the one you meant now I re-read the OP. AFAIK this is all made in Israel, and Botach gets exclusive import rights, and has in the past been big on large-batch ordering. It might be worth calling and asking if they will be back sometime soon OR if you can talk them into getting you one imported only.

Looks nice and low now that you bring that up. I might hate that less 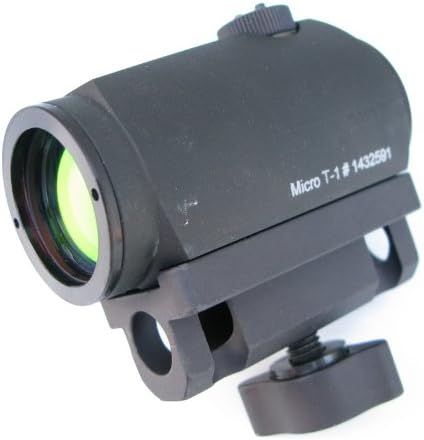 If not, AND you have a friendly machinist/smith, I wonder how far off the shape of the base of something like the ARMS #18 is once you remove the ring mount. See the split and bolts there? I know it won't go straight on, but maybe get holes drilled or maybe use a very thin pistol mounting plate to adapter it up without too much height? Maybe. 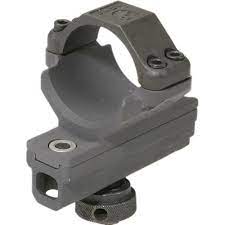 Back in the days of ALICE gear, Delta was slaying people with 733's that had Aimpoint's on the handles. If they wanted a gooseneck, they would have done so but didn't, now why was that, hm?

For retro or those wanting a lightweight option and care about function over form or larping status, they're still valid.

Well confession time. I have an oval face and long-sh neck, so I "turkey neck" like a mo-fo on a "std" set up, that is I scrunch down to align eyeball with iron or RD sights. I love the higher set ups; I can just brush my face, from side of chin to edge of mouth, depending on if I'm looking through RDS or sighting just over it. So I'm in hog heaven here. I no longer have to scrunch down to get cheek bone against stock. It's a much more natural pos for me.

But yeah this has been a big change for me; going from positional shooting with a solid cheek weld, to fast moving shooting with a more casual hold some where on the jawline. I imagine when those dudes first taped up Aimpoints they were like yo this is different. But it sounds like they rehearsed that raid so much they rep'd it in before going live.

I'm not sure if my bud is doing anything "retro" as it were, but he is a big fan of SOG and all the VN-era SF bubbas. He actually got to talk to quite a few of them as he went through the training pipeline, which he said was scary but also fascinating. So yeah this could be a nod towards them, but as said, also a nice light weight option.

I am currently coating all his rifles in OD green colors, and I can tell you, even his LPVO's have risers under them, with mini's at 12 o'clock. So yeah high set ups are definitely being done. So carrying handles? Sure, why not? Get your SonTay raider on!
You must log in or register to reply here.
Share:
Facebook Twitter Reddit Pinterest Tumblr WhatsApp Email Share Link
Top